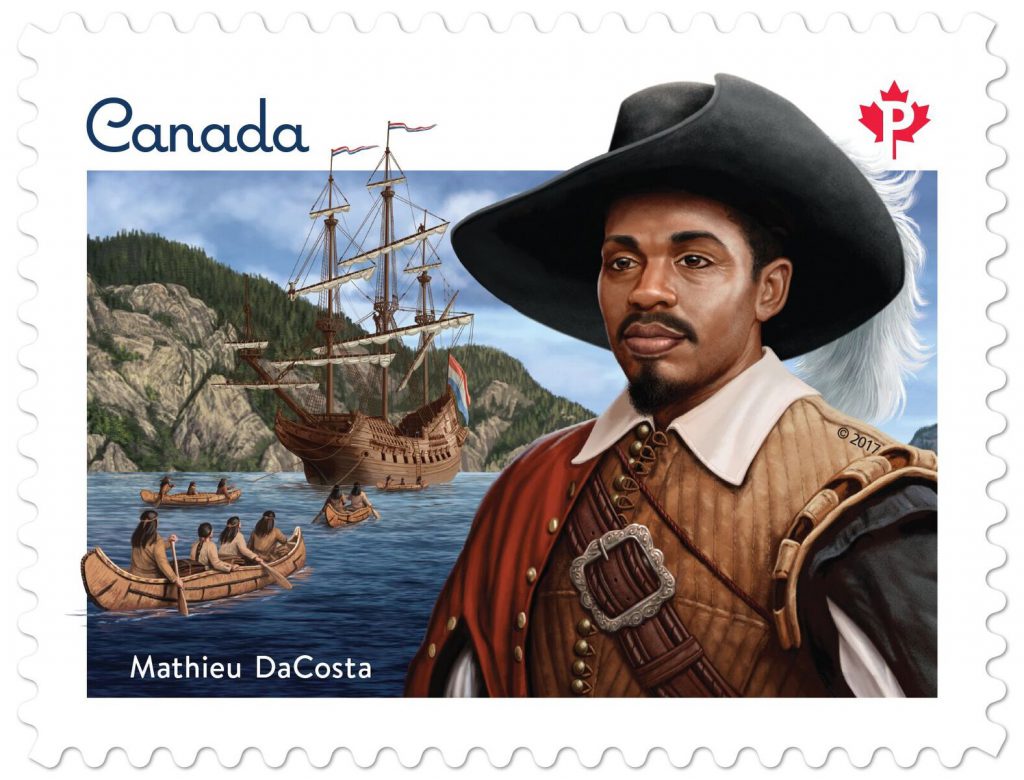 A Permanent stamp commemorating Mathieu Da Costa was issued by Canada Post as part of its 2017 Black History Month issue.

On today’s date in 1995, the House of Commons officially recognized February as Black History Month after a motion was introduced by Jean Augustine, the first Black Canadian woman elected to Parliament.

Black History Month, which according to Black History Canada is an “opportunity to share and learn about the experiences, contributions and achievements of peoples of African ancestry,” was widely promoted in Canada by the Ontario Black History Society, which was founded in 1978.

Prior to this, however, there were other movements recognizing North Americans of African descent.

In 1926, founder of the Association for the Study of African American Life and History Carter G. Woodson – a Black historian, author and journalist who spent much of his life Washington, D.C. – established Negro History Week, which was a precursor to Black History Month.

He chose the month of February, which was when both U.S. President Abraham Lincoln and prominent Black social reformer Frederick Douglass were born.

Eventually, the idea travelled north to Canada, where the first celebration of February as Black History Month was at Toronto’s British Methodist Episcopal Church in 1950 (the church was located at 460 Shaw St. before being lost to fire in April 1998).

The efforts of the Canadian Negro Women’s Association kept Black History Month alive since it was first celebrated in Canada in 1950, according to Black History Canada.

In 1993, the society successfully filed a petition proclaiming February as Black History Month across Ontario. 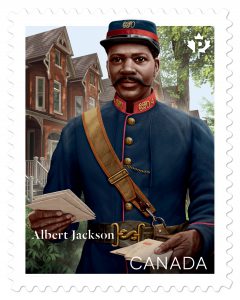 Canada Post’s 2019 Black History Month stamp depicts Albert Jackson in his circa 1890 uniform as he delivers mail along his route.

Canada Post issues an annual Black History Month stamp, and this January saw the release of an issue honouring Albert Jackson, who’s thought to be the first Black letter carrier in Canada.

Jackson earned his appointment to the civil service in 1882 but faced racism from his colleagues, media and members of the public as he pursued what ultimately became a successful 36-year career with the postal service. The colourful stamp, which measures 26 millimetres by 33 millimetres, depicts Jackson in his circa 1890 uniform as he delivers mail along his route.

“Albert Jackson’s determination opened the doors for many Black Canadians to enter the postal service,” said Ann Therese MacEachern, chief human resources officer at Canada Post. “His courage laid the foundation for the diverse workforce we have at Canada Post today.”

Originally from Delaware, Jackson was born into slavery. He was just a toddler when his mother, Ann Maria, fled the U.S. with seven of her children, making the daring escape after her two eldest sons were sold.

The family arrived in Toronto via the Underground Railroad in 1858 and settled in St. John’s Ward, near Osgoode Hall. 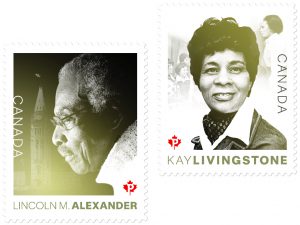 Designed by Winnipeg-based Tétro, both stamps evoke the personal strength of Kathleen (Kay) Livingstone (1918-1975) and Lincoln MacCauley Alexander (1922-2012) through historic photographs sourced from the Livingstone family; the Toronto Star; and the Hamilton Spectator.

“The images selected capture a moment that is both internally reflective and formidable,” says designer Paul Tétrault. “The gold metallic glow pays tribute to their visionary influence and trailblazing achievements.”

Each of the stamps were printed using six-colour lithography and measure 32 millimetres by 40 millimetres. Official first-day covers were cancelled in London, Ont. (Livingstone) and Toronto (Alexander).

In 2017, the annual Black History Month stamp focused on a historical figure who continues to fascinate and confound scholars.

Little is known about Mathieu Da Costa, but from the few records that remain, historians conclude he was a free man who earned a living as an interpreter for Europeans, who were trading with Indigenous people in the New World. Believed to be of African or even Euro-African descent, his connection to Canada came in 1608 – the year Samuel de Champlain founded the city of Québec – when Da Costa signed a contract to work for Pierre Dugua de Mons, a French fur-trader, explorer and governor of Acadia.

“While the full story of Mathieu Da Costa may never be known, interest in his life and in his unique connection with our country is a reminder of the values of respect, acceptance and diversity that Canadians cherish,” said Deepak Chopra, then president and CEO of Canada Post.

With no portrait of Da Costa available, designer Andrew Perro and illustrator Ron Dollekamp worked closely with Canadian historical illustrator and storyboard artist Francis Back to ensure the period clothing and sailing ship reflect De Costa’s time and socio-economic milieu. As with all stamps issued in 2017, the Black History stamp will contain references to Canada’s sesquicentennial that are only visible with a black light.

The domestic rate stamps, available in booklets of 10, are self-adhesive and measure 32 millimetres by 25 millimetres. The official first-day cover is cancelled in Tadoussac, Qué., where historians believe Da Costa may have come ashore. 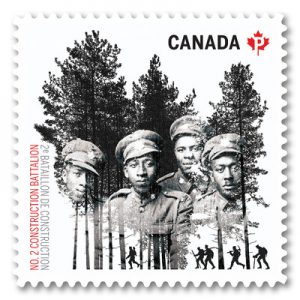 In 2016, a Permanent stamp was issued to mark Black History Month, which was officially recognized by the House of Commons on today’s date in 1995.

In 2016, another Permanent stamp honoured the role of a Black Canadian unit in the First World War.

The No. 2 Construction Battalion stamp measures 32 millimetres by 32 millimetres and was printed by Lowe-Martin using six-colour lithography. The stamps are available in booklets of 10. The booklet’s cover and a first-day-of-issue envelope feature the unit’s badge. The stamps were illustrated by Dennis Budgen using a photograph from the Black Cultural Centre for Nova Scotia. They were designed by Lara Minja, of Victoria’s Lime Design. An official first-day cover was cancelled in Pictou, N.S., site of the Battalion’s first headquarters.

With their country going to war in 1914, Black Canadians stepped forward to join the fight but many were turned away because of racial prejudice. By persevering, they finally won the right to serve overseas, with hundreds of them joining a new, predominantly black unit.

The stamp uses archival photographs in the foreground to depict the faces of some members of the unit, who represent their comrades; below, against a backdrop of tall conifers, members of a forestry crew move in silhouette, their tools on their shoulders. The men felled trees in a mountainous region of France, then milled the timbers into lumber that supported the walls of trenches, built encampments and repaired the railway lines and roads that supplied the front.

They worked 10 hours a day, six days a week, using hand tools. Living and working conditions were harsh. They endured segregation: their sleeping quarters were separate from those of white soldiers, as was the hospital wing where they received medical treatment, but they ate meals with white comrades. While most never saw combat, some died from pneumonia or other diseases.

“Their determination to serve and their contribution to the war effort were an important step on the journey to racial equality in this country,” said Chopra. “We are proud to highlight this little-known aspect of Canadians’ participation in that epic conflict.”

When the First World War broke out in August 1914, military recruiting offices were flooded with men eager to serve in a war that many thought would be over by Christmas. But Black Canadians who tried to enlist needed permission from the local regiment’s commanding officer. It was rarely granted.

By 1916, Canada had been at war for two years and began to face a growing manpower shortage. Black Canadians had continued to pressure the government to allow them to serve. In response, the No. 2 Construction Battalion was formed to recruit Black Canadians from across the country. Hundreds joined up, primarily from Nova Scotia, but also many others from Ontario, New Brunswick, Western Canada, and Quebec, as well as more than 160 recruits from the United States. They sailed overseas in the spring of 1917.

All of its officers, including the colonel who commanded the unit, were white – except one. The Reverend William White, the son of former slaves from Virginia, was a distinguished graduate of Acadia University and an influential pastor who spoke out against segregation in Nova Scotia. As the unit’s chaplain, he was given the rank of Honorary Captain, becoming one of the Army’s very few Black officers.