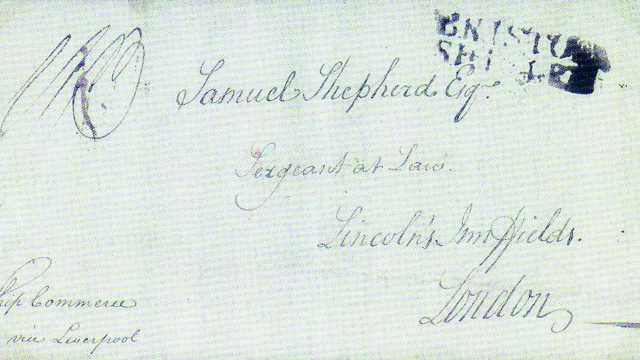 John White, attorney general of Upper Canada, mailed a letter from York to London, England, in February 1798, before the establishment of a post office in York. It was carried outside the mails to England. (Photo by Garfield Portch)

Now derided by some Canadians as the sarcastic “centre of the universe,” present-day Toronto served as the heart of the fledgeling Province of Upper Canada soon after its establishment in 1791. Two years later, with Newark (now Niagara-on-the-Lake) still serving as the British colony’s first capital, Lieutenant-Governor John Graves Simcoe made his first visit to the site of the “Toronto Purchase” (also known as Treaty 13). First negotiated in 1787, revisited in 1805 and finally settled in 2010, the Toronto Purchase saw the local Indigenous community – the Mississaugas of the Credit First Nation – surrender about 250,000 acres of land to the British crown. The deal was made in exchange for “149 barrels of goods and a small amount of cash” – £1,700 altogether – according to the 1986 book Toronto Observed. The goods included 2,000 gun flints, 120 mirrors, 24 brass kettles, 24 laced hats, a bale of flowered flannel and 96 gallons of rum. Continue reading →

Another B.C. show deemed a success