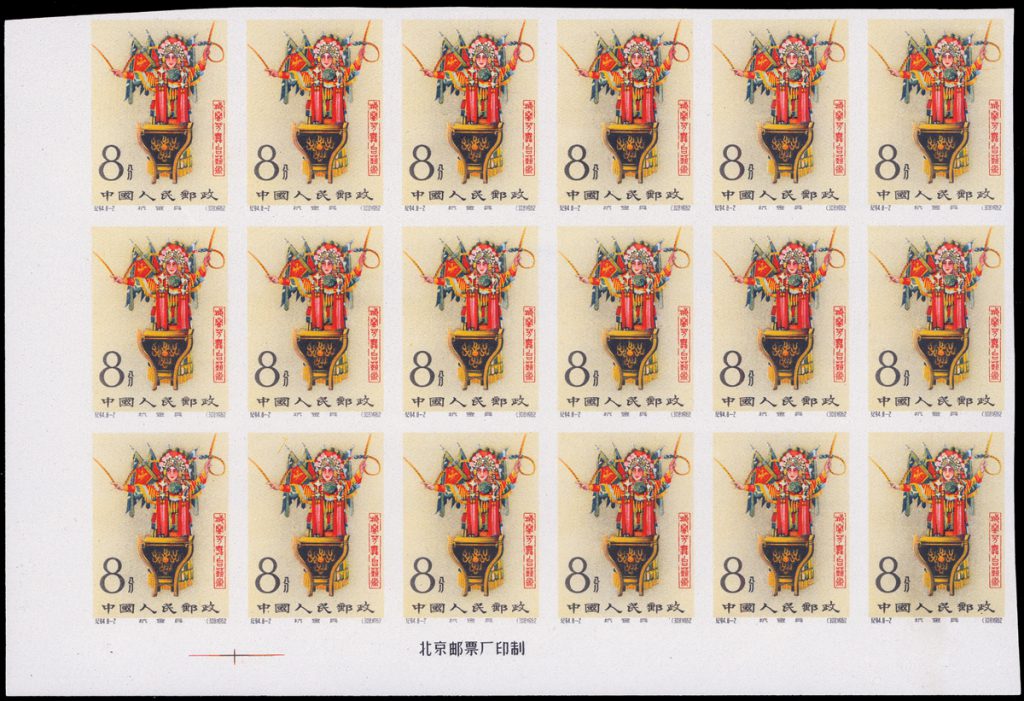 A complete set of imperforate corner blocks from the 1962 Stage Art of Mei Lan-fang issue is being offered as Lot 21 of Eastern Auction’s Nov. 3-4 sale. Issued by the People’s Republic of China, this lot has a catalogue value of $117,000.

A “magnificent and very fine set” of sought-after imperforate stamps issued in 1962 by the People’s Republic of China is expected to bring big money at a New Brunswick auction this November.

Described as an “outstanding complete set” of imperforate corner blocks from the 1962 Stage Art of Mei Lan-fang issue (Scott #620-627), the stamps are being offered as Lot 21 of the two-day sale hosted by New Brunswick’s Eastern Auctions. Altogether, the 18-stamp set – one of nearly 1,100 lots from the Max Goldman Estate – has a catalogue value of $117,000.

“Advanced collectors are well aware that these are rarely offered on the marketplace and will receive much attention and spirited bidding,” said Yohann Tanguay, chief describer at Eastern Auctions.

“I don’t think there will be much demand coming out of Canada. I wouldn’t be surprised if most of the Chinese stamps are sold primarily in Hong Kong, the U.S., Europe and of course China.”

“This is the key souvenir sheet of China,” said Tanguay, who’s also a member of the Vincent Graves Greene Philatelic Research Foundation expertizing committee. “If you collect China, you’ll always want to have one, and these are in very good condition compared to what’s out there.”

Described as Very Fine, never hinged, and in “well-above average condition for this notoriously difficult sheet,” this lot has a catalogue value of $90,000.

Rounding out the People’s Republic of China highlights is Lot 118, a “spectacular” full sheet of 40 “Directives of Chairman Mao” stamps issued in 1968 (Scott #996a). According to Tanguay, a “very small number of sheets of this key issue remain intact.” Consisting of eight se-tenant strips of five stamps, this lot has a catalogue value of $42,000.

“We were quite surprised to see these big blocks,” said Tanguay, who added they’re often offered as single lots at auctions in China. “When you see pairs or blocks of these stamps, it’s quite unusual. These big blocks are almost unheard of, so that lot will be hotly contested.”

The People’s Republic of China section will be followed by a general sale, which includes an “extensive array of worldwide country collections, many offered intact including useful selections of British Empire and Russia, in addition to exotic countries.”

British North America will be offered as Lots 343-409, which will include several classic and airmail rarities, archival proofs and a strong showing of large lots and collections.

Highlights include Lot 386, a 1927 (May 21) De Pinedo flight cover bearing a “remarkably well centered example” of the 1927 60-cent airmail stamp issued by Newfoundland (Scott #C4) with “Air Mail / DE PINEDO / 1927” three-line overprint in red. The stamp is tied by a St. John’s, Nfld. machine cancellation reading “May 20 10AM 1927.” Below the machine cancellation is a May 21, 1927 dispatch cancellation from Trepassy, Nfld. A fine cover bearing a choice Extremely Fine example of a Newfoundland airmail rarity, this lot has a catalogue value of $30,000.

“This is probably the most popular and sought-after airmail of Newfoundland, and to have it on cover, the demand is quite high,” said Tanguay.

Rounding out the British North America highlights is Lot 368, a “rare unused example” of the 1861-62 imperforate one-pence reddish brown on medium hard wove paper. Described as having “prominent and very distinctive rich colour … surrounded by full even margins, this lot is accompanied by a 1930 Royal Philatelic Society of London expertization certificate and a 2015 BPA Expertising certificate. According to pre-eminent Newfoundland philately expert Robert H. Pratt, only four sheets (a total of 480 stamps) are believed to have been printed.

“This is a stamp that’s often missing from advanced collections,” said Tanguay, who added the lot has a catalogue value of $16,000. “People are always looking for that stamp.”

The second day of the sale is “entirely devoted to Canada and is surprisingly diverse from proofs to postal history lots, superb mint NH (never hinged) singles to unusual plate varieties,” Tanguay said.

Among the Canadian highlights is Lot 440, a “lightly cancelled example of Canada’s most desirable stamp,” the 1851 12-pence imperforate black on handmade laid paper (Scott #3). Described as a “very presentable and affordable example of Canada’s most iconic stamp,” this example is accompanied by a 1990 BPA Expertising certificate and has a pre-sale estimate of $20,000.

“This is a very affordable copy of the genuine stamp that every wants to own,” said Tanguay.

Other Canadian highlights include Lot 833, an “outstanding mint block” of 10 1954 two-cent Wilding stamps originating from a miniature pane of 25 stamps. Imperforate horizontally between the stamps, this item is a new discovery that was revealed to the public only a few months ago.

“The consignor kept that item all these years, and to the best of our knowledge and his information, it’s the only one known,” said Tanguay, who added it’s “quite unlikely we’ll find more because it has been so many years already.”

Described as an “impressive and unique piece, holding the entire known population of this perforation error,” Lot 833 is accompanied by a 2017 Vincent Graves Greene Philatelic Research Foundation expertization certificate and has a pre-sale estimate of $20,000.

Among the top airmail highlights is Lot 897, an unused example of a “celebrated and very rare airmail” stamp, the 25-cent green and yellow stamp issued in 1927 (Scott #CLP6) for the trans-Atlantic flight of Captain Terrance Tully and his navigator Lieutenant James Medcalf. Both men disappeared after departing from Harbour Grace, Nfld. on their way to England. Of the 100 stamps originally printed, only 13 examples are known to exist in any condition as most examples were affixed to covers carried on the ill-fated flight. This lot is accompanied by a 2006 Vincent Graves Greene Philatelic Research Foundation expertization certificate and has a pre-sale estimate of $15,000.

Rounding out the highlights is a strong section of large lots and collections, which is offered as Lots 980-1089.

“Overall, the sale is very well diversified from pence to modern. We had several consignments where the collector went into great, great depth with their collections, and we’ve offered the key items and the super high-quality single lots, but there’s a fair amount of good material left in highly specialized collections that are being offered at the end of the sale,” said Tanguay.