On this day in 1971, Guy Lafleur played his first National Hockey League game with the Montréal Canadiens, getting three assists in the Canadiens’ 7-4 exhibition game win against the Bruins, at the Montréal Forum.

The iconic NHL all-star was the first player in the National Hockey League to score 50 goals and 100 points in six straight seasons.

Known as “The Flower” but also as “Le Démon Blond,” Lafleur played for three teams in 17 seasons between 1971 and 1991: The Montreal Canadiens, New York Rangers and Quebec Nordiques. He earned five Stanley Cup championships as a cornerstone player for the Canadiens. 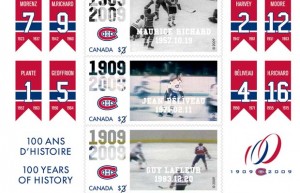 On October 17, 2009, Canada Post started issuing a series of stamps commemorating the 100th anniversary of the Montreal Canadiens. The series of four stamps featured Maurice Richard, Jean Béliveau, Guy Lafleur, and a close-up of the retired #9 jersey belonging to «Rocket» Richard.

Although maybe not what he was best known for, but part of his history just the same: did you know that in 1979 he released an album? Entitled Lafleur, the album consisted of Guy reciting hockey instructions to a background of disco music!

For whatever reason of pride, better sightlines or just plain stubbornness, Lafleur is also one of the NHL players who did not have to wear a protective helmet, long after they were required, because of a grandfather clause in his contract.

Besides the honours received during his playing career, in 1980 he was made an Officer of the Order of Canada, and in 2005, he was made a Knight of the National Order of Quebec.

Canada Post caught up with his success in the new millennium, releasing stamps in 2002 (shown) and in 2009.