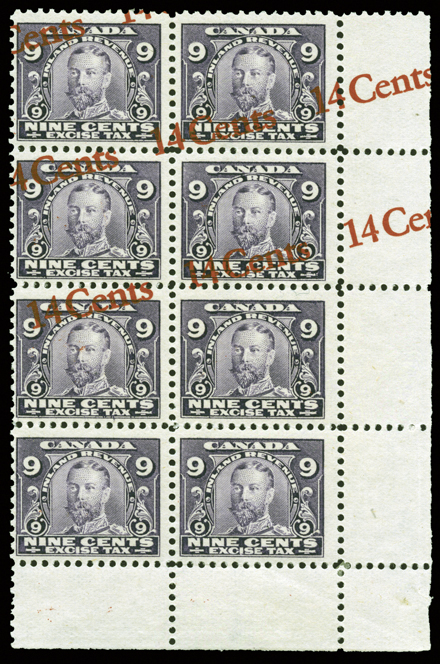 Among the revenues is a corner block of 14-cent overprint, on the 1915 nine-cent excise stamp, van Dam #FX28.

The third sale of the Ron Brigham Collection will feature material acquired but never publicly shown by Brigham, who was a prolific and successful exhibitor of Canadian stamps.

The sale will be held Nov. 22, at the Brampton Golf Club, a different venue than the previous two sales, held at the Toronto Airport Hilton Hotel. At the second sale, held this spring, Brigham had said he would be moving to a different location.

According to Charles J.G. Verge, chief executive officer of Brigham Auctions, the third session, will feature back of the book items from 1875 to 1978, and sheets from 1857 to 1952. Back of the book is a term used to describe stamps outside of the definitive and commemorative programs, such as air mails, postage dues, revenues, postal stationeries, and registered mail.

“None of the material that is for sale has been seen because he (Ron) never put exhibits together of the back of the book material, and never exhibited the full sheets,” Verge said.

“Much of it has been put away for a long time.”

Even though the material was not exhibited, many of the lots are hard to find.

“It’s not as complete as many of the exhibits, but there is a lot of good material, such as die proofs of airmails, imperfs, and a die proof of the first dead letter office material from 1902,” Verge said.

Among the other highlights are an 1898 special delivery trial colour-die proof, and a 1914 cover from Canada to Syria with a military and censor handstamp with a manuscript “not transmissible” resealed with the three “dead letter officially sealed” stamps, Unitrade #OX4. Finally there is a 1915 dead letter office handstamp.

There are full sheets of two, five, and eight cents registered stamps. Verge described the eight cents Unitrade #F3 sheet as unique and the key piece of the auction.

The war tax stamps, introduced during the First World War, and continued after for a short time, is also noteworthy, with 165 lots.

“That’s very extensive, and that has never been shown before,” Verge said.

This was material he bought as he went along, but never put an exhibition together.

The revenue section, with more than 70 lots includes good selections of gas inspection, electric light, and weights and measures stamps, with die proofs of them as well.

Verge said the catalogue is being worked on now, and orders are now being accepted while supplies last.

Brigham was an active and successful exhibitor in Canada as well as internationally.

Housed in more than 150 volumes, the collection has gathered some 25 Large Gold Medals at international-level exhibitions and several Grand Prix competitions, including the Grand Prix d’Honneur at BELGICA 2001, the first and only time a Canadian collection has won the World’s Philatelic Championship. This triumph was realized in the minimum required time by the Fédération Internationale de Philatélie – a record that has yet to be equalled.

It also has won the Grand Award at the Convention of The Royal Philatelic Society of Canada an unprecedented five years in a row with five different segments of the collection. The Brigham Collection won the prestigious American Philatelic Society’s 1998 Champion of Champions competition with the Pence and Cents and the Grand Award in the Open Class with the Large Queens, the first time any exhibitor won both American championships in the same year.

It is believed to be the most complete collection of Canadian stamps ever assembled.

The firm plans to conduct about a dozen auctions of the Brigham collection, expected to be held over the next few years.

The sale will also appear on the website StampAuctionNetwork.com starting Oct. 1.