By Kathryn.Groom
7 months ago
3 min read
0

To the shock of many, he informed his cabinet that he was retiring from politics after a very successful year of Centennial celebrations. He resigned as Leader of the Liberal Party and as prime minister. He is commended for his “Pearsonian Internationalism”, multilateralism approaches, and United Nations-based policies during his time as prime minister.

At the helm of Canada’s government for five years from 1963-68, Pearson never held a majority but nonetheless introduced innovative and long-lasting social initiatives, including universal health care, the 40-hour workweek (plus the now-standard two weeks of vacation) and the Canada Pension Plan. 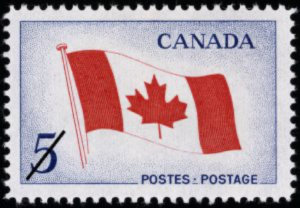 A five-cent stamp released on June 30, 1965, was the first issue to depict the maple leaf flag, which was Canada’s first official flag.

On June 30 of that year – a day before Canada Day – the new flag was shown on a stamp for the first time with the Post Office Department’s release of a five-cent commemorative (Scott #439).

Designed by Harvey Thomas Prosser with the image engraved by Allan Alexander Carswell and the lettering engraved by Gordon Mash, the stamp includes a hidden date near the base of the flag pole. 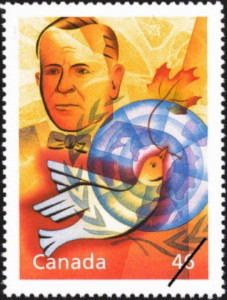 A career diplomat, Pearson received the Nobel Peace Prize in 1957 for his role in resolving the Suez Crisis with the creation of the United Nations Emergency Force (UNEF), a peacekeeping force.

In 1973, a year after Pearson’s death, the late prime minister was commemorated on a six-cent dark red stamp (Scott #591) issued by Canada’s Post Office Department (now Canada Post) as part of its “Caricature Definitives” series (SC #586-93a). Printed by the Canadian Bank Note Co., the stamp has general tagging along two opposite sides.

More recently, in 2000, Pearson was featured on a 46-cent stamp (SC #1825c) issued by Canada Post as part of its Millennium Collection. This stamp, which was printed by Ashton-Potter on Tullis Russell coated paper, was issued on a pane of four that celebrated Canadian humanitarians and peacekeepers (SC #1825). 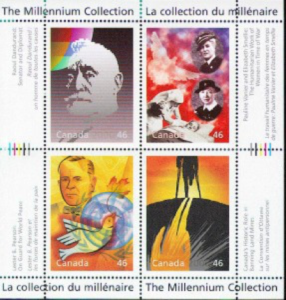 “These bold 112-by-108 mm souvenir sheets frame four 36-by-48 mm stamps in thematic groupings that celebrate Canadian giants in fields as diverse as medicine, finance, peacekeeping and international development,” reads a press release issued by Canada Post for the extensive series.

“Lester B Pearson’s involvement in the creation of an international force to maintain peace in the Middle East during the Suez Crisis earned him a Nobel Peace Prize and highlighted Canada’s role as a global peacekeeper.”