The USPS' forthcoming Sharks Forever stamps will be issued in sheets of 20 (shown above) on July 26.

Later this month, the U.S. Postal Service (USPS) is slated to issue a set of five Sharks Forever stamps, each of which features a different species that inhabits American waters.

The set, which will be released following a first-day-of-issue ceremony at the Newport Aquarium in Newport, Ky. on July 26, includes the following sharks:

The shortfin mako shark (Isurus oxyrinchus) is depicted on one of the five Sharks Forever stamps.

Each of the stamps features the respective shark’s name. Styled in lowercase letters, the words “usa forever” also appear on each stamp.

The set will be issued in sheets of 20 stamps. Art director Derry Noyes designed the sheet with original artwork by Sam Weber. The sheet includes four stamps each of Weber’s five shark illustrations.

The stamps are available for pre-order at at usps.com/shop.

Possibly no other creatures are as mythologized—or as misunderstood—as sharks.

Blockbuster thrillers and other sensationalized media have fuelled the belief that sharks are monsters—unthinking, bloodthirsty, vengeful and primitive. While they are ancient creatures, having emerged long before the first dinosaurs, after 400 million years, the world’s shark species have adapted to their ecological role.

Sharks’ adaptations include light, flexible skeletons of cartilage, teeth replaced without limit and skin covered by a hydrodynamic surface of tiny tooth-like structures. Their keen senses include one that detects electrical signals given off by prey and enables navigation by Earth’s magnetic field. Their nervous systems are also adapted to sense minuscule water movements, such as the struggles of a far-off fish. 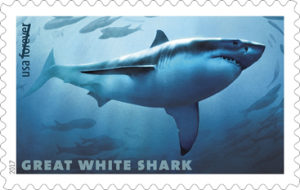 An athlete of the shark world is the swift, streamlined mako shark. One of the five stamps depicts a shortfin mako (Isurus oxyrinchus) knifing through the water near the surface.

Another stamp depicts the pelagic thresher shark (Alopias pelagicus), the most distinctive feature of which is its unique, whip-like tail fin, which is seen trailing in the background of the design.

The world’s largest fish is the sluggish, filter-feeding, school bus-sized whale shark (Rhincodon typus), which is also featured in the five-stamp set.