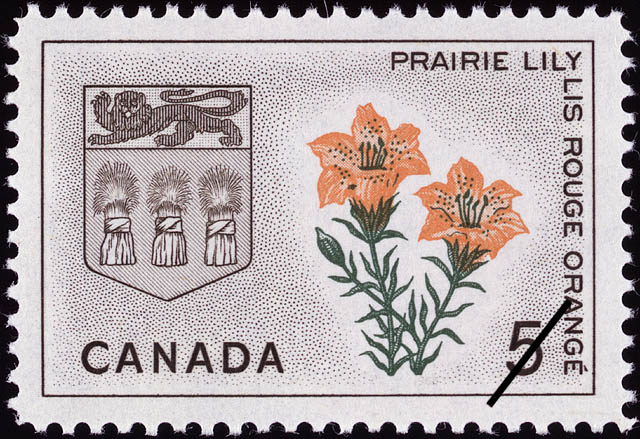 The Coat of Arms of Saskatchewan is depicted alongside the province's official emblem, the prairie lily, on a five-cent stamp issued by Canada's Post Office Department (now Canada Post) in 1966.

On today’s date in 1906, King Edward VII granted a coat of arms to the province of Saskatchewan.

The prairie lily (Lilium philadelphieum), which was officially adopted as Saskatchewan’s emblem in 1941, was depicted alongside that province’s coat of arms on a five-cent stamp (SC #425). 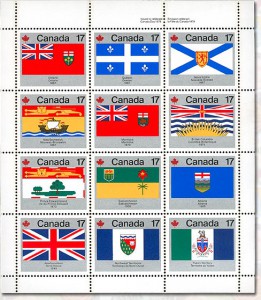 The flags of the 12 provinces and territories that comprised Canada in 1979 are commemorated on a 12-stamp sheet issued that year by Canada’s Post Office Department.

In June 1979, the Post Office Department featured the country’s provincial and territorial flags in a special Canada Day series (SC #821-832).

A 12-stamp sheet depicts the flags of the 12 provinces and territories that made up Canada in 1979. The following year, Newfoundland and Labrador (pictured on the sheet with the Union Flag) adopted its own flag, and in 1999, the territory Nunavut was established.

A 17-cent stamp (SC #828) depicts Saskatchewan’s flag, which was adopted about a decade earlier in September 1969, after a province-wide design competition that saw more than 4,000 entries.

The flags’ designs – by Montreal artist Raymond Bellemare, who based his interpretations on the official written heraldic descriptions – were produced using the tradition and conventions of heraldry. Nearly 5.5 million of each of these stamps were printed by Ashton-Potter.