The 1908 Dominion Exhibition was held in Calgary, Alta. from June 29-July 9 of that year.

The 1908 exhibition ran from June 29-July 9 in what was then only a small city of 20,000 people. It was considered the proving grounds for the inaugural Calgary Stampede that would take place four years later.

In 1912, Exhibition Park (also known as Victoria Park, home of the 1908 Dominion Exhibition and subsequent Calgary Stampedes) was featured on a postcard printed by the Bloom Brothers. The card depicts the grandstand to the right, the Industrial Building to the left and the garden in the foreground.

The Bloom Brothers issued a postcard showing Exhibition Park, home to the Dominion Exhibition, in 1912.

The Industrial Building, which was designed by George Stanley Rees, was built in 1908 for the first Exhibition and served as the main exhibit hall on the Victoria Park fairgrounds until May 1931, when it was destroyed by fire.

A new pavilion – called the Bessborough after Canada’s 14th Governor-General Vere Brabazon Ponsonby, ninth Earl of Bessborough – was constructed on the site in time for the 1931 exhibition.

In 1959, the Big Four Building was completed at a cost of $1.8 million. It was named after the four pioneer ranchers and businessmen who bankrolled the first “Stampede in Calgary” in 1912:

During current Calgary Stampedes, the Big Four Building houses the arts and crafts exhibits, the international food fair and the casino. 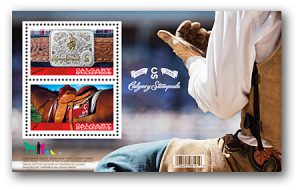 In 2012, two Calgary Stampede stamps were issued by Canada Post in booklets of 10 stamps as well as souvenir sheets of two stamps (shown above).

In 2012, to mark the 100th anniversary of the “Greatest Outdoor Show on Earth,” Canada Post issued two stamps evoking the spirit of the Wild West.

“The Calgary Stampede is a great source of western and Canadian pride,” said Jim Phillips, director of stamp services for Canada Post. “We are also very proud to be among the first postal administrations in the world to connect stamps – a very traditional tool – with the latest technology and hope this will bring newfound interest in the world of stamp collecting.” 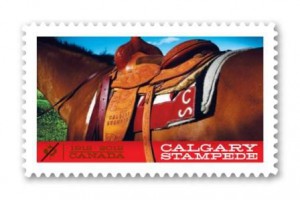 Canada Post issued a domestic-rate Permanent stamp in 2012 to mark the 100th anniversary of the Calgary Stampede.

Sinewy-strong and beautiful, a powerful rodeo horse stands saddled on the domestic-rate Permanent stamp. Featured prominently on the U.S.-rate stamp is the stampede’s limited-issue, silver-and-gold anniversary belt-buckle, 100 of which were produced as event trophies in 2012. A souvenir sheet bearing one of each stamp brings out the human element with a cowboy readying for the rodeo.

“To have been chosen to work on the stamps for the Calgary Stampede Centennial is the honour of a lifetime,” said designer Xerxes Irani, who has been creating print materials, logos and other physical objects for the stampede for about 15 years. “Having grown up in Calgary in a home full of western art, this feels like a further extension of my roots and heritage.”

The Big Four appeared on the inaugural Calgary Stampede poster in 1912.

An archival photograph of the late Guy Weadick, the U.S. cowboy who was the driving force behind the establishment of the stampede, appears on the U.S. booklet cover. Weadick was a Wild West performer on the vaudeville circuit across North America at the turn of the 20th century. He travelled to Calgary, where he joined the wealthy cattlemen known as the Big Four to co-found the Calgary Stampede, which ran Sept. 2-5, 1912, after ranchers and farmers finished harvesting and would be free to attend.

“Given the Stampede’s place in Western Canadian culture, it is fitting that we mark the event’s 100th anniversary in a number of important ways,” said Jason Kenney, then minister of citizenship and immigration and MP for Calgary Southeast. “These stamps are beautifully designed and truly capture the heart of the Calgary Stampede.”