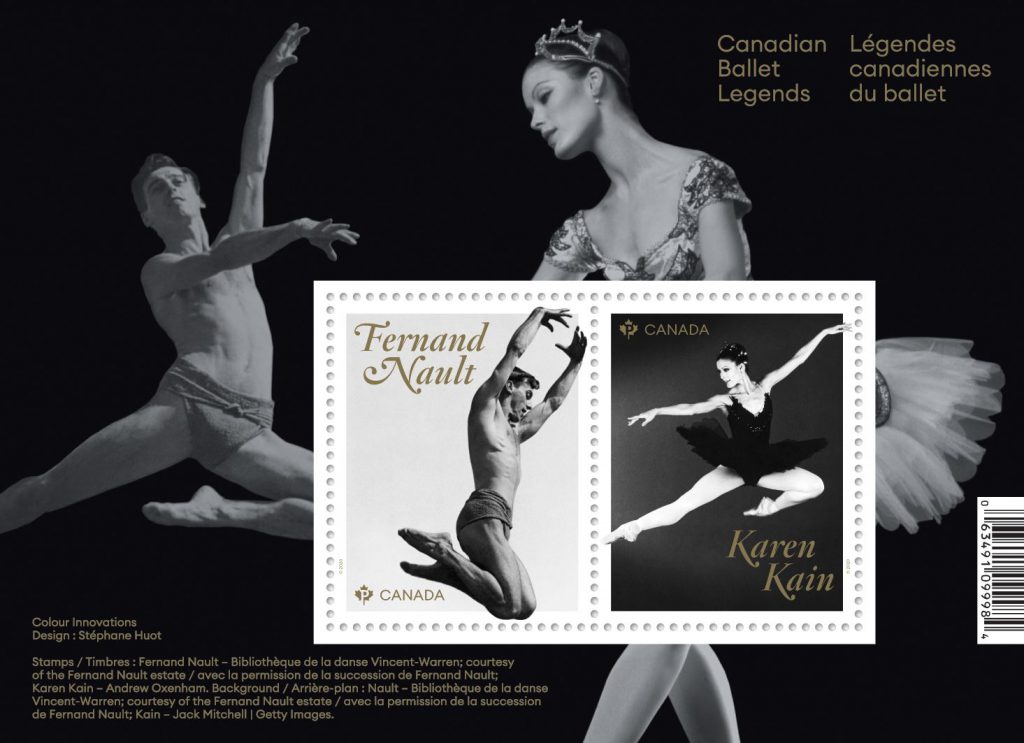 Karen Kain, of Hamilton, Ont., and the late Fernand Nault, of Montréal, are the focus of the two stamps issued today. The designs are available separately as booklets of six Permanent domestic-rate stamps or together on a two-stamp souvenir sheet. Designed by Stéphane Huot and printed by Toronto’s Colour Innovations using five-colour lithography, PVA gum and Tullis Russell paper, both stamps feature a dramatic black-and-white photo of the respective artist in performance, against a simple background with metallic gold accents.

In addition to the two-stamp souvenir sheet, both designs are also available separately on six-stamp booklets (Fernand Nault issue shown).

“Canadian ballet dancers are revered the world over—and beloved here at home, which is why we’re celebrating the careers of two of our country’s ballet legends,” wrote Director of Stamp Services Jim Phillips in the latest edition of Canada Post’s Details magazine.

“Recognized as one of the most gifted classical dancers of her era, Karen Kain joined The National Ballet of Canada in 1969, performing many of ballet’s greatest roles, and later leading the National Ballet as artistic director,” added Phillips. “Fernand Nault was a prominent dancer and choreographer who spent two decades with American Ballet Theatre before joining what is now the Grands Ballets Canadiens de Montréal, which he is credited with raising to international status.”

In 1971, Kain was promoted to principal dancer following her debut as the Swan Queen in Swan Lake. In 2005, she became the National Ballet’s artistic director before celebrating a half-century with the ballet company in 2019. Among her many awards and honours, Kain is a Companion of the Order of Canada and an Officier of France’s Ordre des Arts et des Lettres.

For more than 25 years, Nault added a diverse range of works to the company’s repertoire and often contributed as a guest choreographer abroad. His long list of accolades includes the Governor General’s Performing Arts Award for Lifetime Artistic Achievement and Quebec’s Prix Denise-Pelletier for contributions to the performing arts. He died on Dec. 26, 2006. 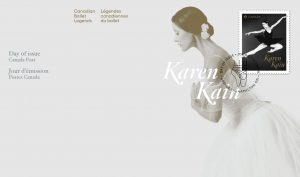 Each stamp is also available on an official first-day cover (Karen Kain issue shown) serviced with a cancel from the respective dancer’s hometown.

A total of 70,000 souvenir sheets, each measuring 123 millimetres by 90 millimetres, were also printed.

The stamps, both of which measure 32 millimetres by 40 millimetres, are also each available affixed to an official first-day cover (OFDC) cancelled in Kain and Nault’s hometowns of Hamilton and Montréal, respectively. A total of 14,000 OFDCs – 7,000 each – were printed.

The set is available through Canada Post online and some of its countrywide postal outlets beginning today.

Following today’s ballet issue, Canada Post will take a brief stamp-issuing hiatus before its next release in June.

On June 7, Canada Post will release a commemorative envelope celebrating the 150th anniversary of the 12e Régiment blindé du Canada plus what the Crown corporation calls “a prime issue.”

Another stamp marking the Bluenose centennial is also due on June 29.