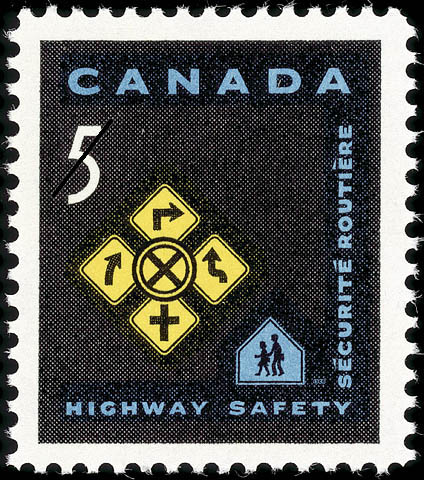 A five-cent 'Highway Safety' stamp was issued to coincide with the opening of the 12th Annual Canada Highway Safety Council Conference on today's date in 1966.

Coinciding with the conference, Canada’s Post Office Department (now Canada Post) issued a five-cent Highway Safety stamp (Scott #477) as “a contribution to the cause of safety on the nation’s roads.”

The stamp was printed by the Canadian Bank Note Co. and designed by Helen Roberta Fitzgerald with engraving by Yves Baril (picture) and Donald J. Mitchel (lettering).

‘ONE MISHAP EVERY 1.5 MINUTES’

In 1964, traffic accidents “killed, injured or caused property damage throughout the year at a pace of one mishap every one and a half minutes,” according to a press release issued by the Post Office Department.

“These accidents resulted in fatal injuries every two hours and caused bodily injury every four minutes for the full twelve-month period. Founded in 1955, the C.H.S.C. has statistics showing three out of four traffic deaths occur within twenty-five miles of the victim’s home, moreover, half of the injury or death dealing accidents occur at 40 miles per hour, or less, thereby pointing up the need to install and use seat belts even for short drives. The council stresses the need for an equal awareness of the dangers by drivers, passengers and pedestrians.”

According to the 2016 “Canadian Motor Vehicle Traffic Collision Statistics” report, in 2016:

The 1966 Highway Safety stamp also replaced the “familiar visible gum” of older issues with an improved adhesive that was “tasteless, and virtually invisible to the casual observer.”

“It has proved to have superior adhesive qualities during the several years it has been used in North America on various labels and stickers. Manufactured under the trade name of ‘DAVAC’, the new adhesive does not react to the humidity factor in the air as do other glues.”