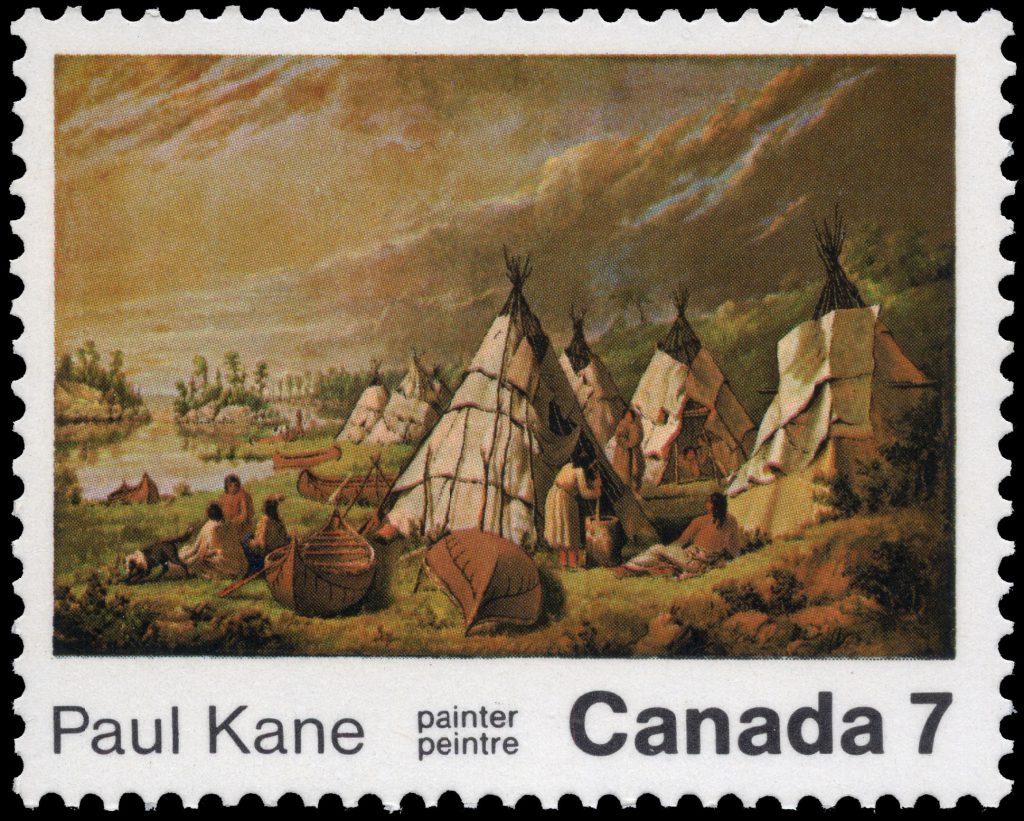 On today’s date in 1871, Irish-born Canadian painter Paul Kane, famous for his paintings of contemporary life among First Nations communities in Western Canada, died in Toronto.

Kane’s work provides a remarkable visual record of early life among Canada’s First Nations. Widely recognized for these illuminating paintings, Kane also offered great insight through his descriptive journal, Wanderings of an Artist Among the Indians of North America from Canada to Vancouver’s Island and Oregon through the Hudson’s Bay Company’s Territory and Back Again, which was published in 1859.

Kane came to Canada from County Cork, Ireland, where he was born in 1810. His days as a boy in York — the tiny pioneer settlement of a few thousand people that eventually became Toronto — put him in frequent contact with the Mississaugas, a First Nations tribe that frequented the shores of Lake Ontario.

While working at a furniture factory as a sign and furniture painter, Kane also painted several portraits of local personalities, including the sheriff and his employer’s wife.

He then travelled across the U.S. and into Europe, where he trained himself and refined his art by copying European masters.

After studying for a few years, Kane returned to Canada to put his new skills to good use. On two separate voyages through the Canadian northwest, he captured scenes that illustrated the contemporary way of life. The first trip brought him to Sault Ste. Marie and back; however, with the support of the Hudson’s Bay Company for his second trip, he set out on a much longer voyage from Toronto – across the Rocky Mountains – to Fort Vancouver and Fort Victoria in what Canadians called Oregon Country.

When Kane finally returned to Toronto, he produced more than 100 oil paintings from the sketches he made in his travels across the country. Kane’s work – in particular his field sketches – remain a valuable ethnological resource. His oil paintings, however, are considered a part of Canadian heritage. He would often embellish his sketches when reproducing them on canvas, forgoing accuracy for more dramatic scenes.

“On my return to Canada from the continent of Europe, where I had passed nearly four years in studying my profession as a painter, I determined to devote whatever talents and proficiency I possessed to the painting of a series of pictures illustrative of the North American Indians and scenery,” wrote Kane in the preface to Wanderings of an Artist among the Indians of North America.

Kane died on Feb. 20, 1871, and was buried in Toronto’s St. James’s Cemetery, where a stone commemorates his remarkable legacy.

The stamp was designed by William Rueter.