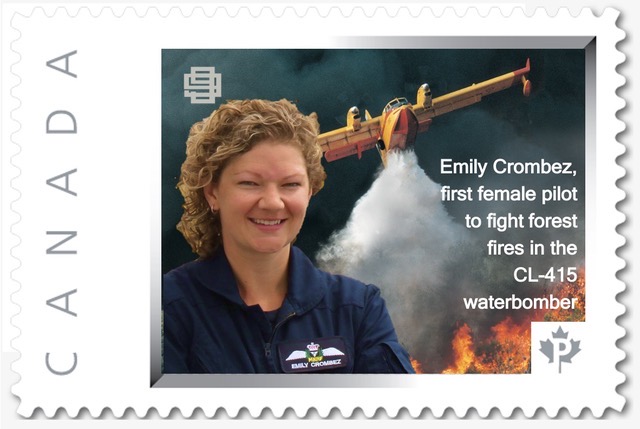 A new Picture Postage stamp – the 13th annual issue of the “Canadian Women Aviatrix Stamp Collection” – was launched this June by the Canadian Ninety-Nines, the world’s largest and oldest organization of licensed female pilots.

Crombez became the first female pilot to crew the aircraft in 2014, when she was dispatched to fight forest fires.

“Firefighting involves scooping up many loads of water and dropping them in a specified fire target area while often encountering updrafts, turbulence and smoke,” she said. “You are heavy and slow, performing steep maneuvers – exercises you are usually taught to avoid.”

After graduating from Confederation College’s Aviation Flight Management Program, she worked as a pilot in northern Ontario with Bearskin Airlines before moving on to ﬂying Boeing 737s for Westjet and Boeing 787 Dreamliners for Air Canada.

Designed by Suzanne Wiltshire, the stamp is only available through the Canadian Ninety-Nines at canadian99s.com/stamps. It’s available in sheets of 50 stamps ($85); “keepsake” sheets of 25 stamps plus a single ($45); booklets of 12 stamps ($24); and first-day covers ($7).