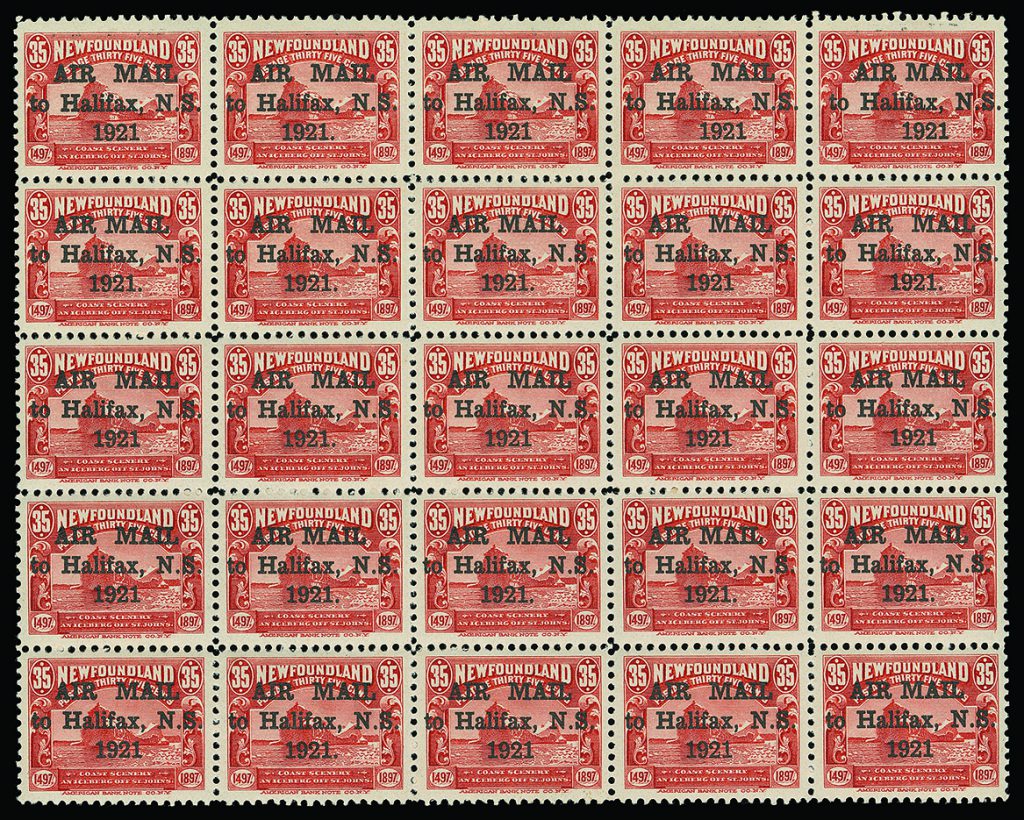 A complete sheet of Newfoundland’s 1921 Halifax airmail overprints is offered as Lot 294 of Eastern Auctions’ Oct. 2-3 public sale. It carries a catalogue value of $18,125.

This is the first story in a two-part series highlighting Eastern Auctions’ Oct. 2-3 public sale.

With a spotlight on British North America (BNA), including a strong section of decimal-era Newfoundland stamps and postal history, more than 400 lots will cross the block in the first session of Eastern Auctions’ next public sale.

The first of three sessions – offering Lots 1-416 – will kick off on Oct. 2 at 1:30 p.m., with another session later that evening and a final offering the following day.

“The main strength is in Newfoundland’s decimal period, which ran from 1865 to 1897,” said Yohann Tanguay, stamp specialist and chief describer with the New Brunswick-based auction house.

Following a 76-lot worldwide section, BNA will take centre stage from Lots 77-353 with a range of classic stamps, specialized large lots and collections. The Newfoundland section – running from Lots 140-353 – is highlighted by the Don Steele Collection of 1865-97 “Cents” issues, including 20th-century proofs, varieties, imperforates, revenues and pioneer airmail stamps.

“From the numerous emails and phone conversations we have had with our regular buyers as well as our consignors, they are patiently awaiting our sale,” said Tanguay. “It will be a noticeably larger auction in terms of volume thanks to the numerous specialized larger lots, collections and estates that were entrusted to us since March.”

“This is the strongest and most comprehensive showing of fakes and forgeries we will have ever offered at auction – and in a separate section in the catalogue,” said Tanguay. “In addition to the crude and more run-of-the-mill lithographed forgeries produced by the Spiro brothers, of Hamburg, the collection has many not-often-seen engraved Oneglia and many dangerous forgeries that are ideal for reference.”

Tanguay and his colleagues have seen similar examples “still lurking undetected in many collections out there,” he said, “highlighting the importance of studying your stamps and by having a reference collection.”

“We believe examining closely forgeries, studying their method of printings, papers, inks can someone truly appreciate and understand genuine stamps.”

Printed in black on card-mounted india paper, the stamp-sized essay features the corrected lower left “3” plus other “small differences not present in the final die for the issued stamp,” Tanguay said.

“One major trait not found on the plate proofs and issued stamps is the lack of the outer delineation line surrounding the central vignette trefoil.”

“We would like to point out that no actual die proof of the final die is known in private hands,” according to the auction catalogue, which adds “only a few” Die I and Die II die essays are believed to exist.