As postage rates increase today for the first time since 2014, Canada Post has released two new issues, including the nine-stamp “From Far and Wide” set and a new definitive honouring Queen Elizabeth II.

Designed by Steven Slipp, whose work has appeared on more than 20 stamps, the latest Queen Elizabeth II definitive brings a “fresh approach to the latest stamp of Her Majesty,” according to Canada Post’s Details magazine.

“It was a real philatelic education, researching and comparing the stamps of our monarchs over more than a century and a half,” said Slipp, who took an “in-depth look” at past royal issues.

“It was also a time-warp for a print nerd like me to see how the techniques and technologies used to create stamps have evolved since the Queen’s coronation in 1953.”

The stamp bears a 2017 photo of the Queen taken in Portsmouth, England, by Chris Jackson.

“I felt we could crop tightly to her face and have the hat brim frame this engaging portrait,” said Slipp, commenting on the stamp’s 20-millimetre-by-24-millimetre dimensions.

An official first-day cover (OFDC) was cancelled in Ottawa.

Also designed by Slipp, the back of the booklet bears a photo of the Queen wearing the Canadian maple leaf brooch during her 2010 Royal Tour of Canada. This piece of jewelry is worn during royal tours to Canada by several generations of women in the Royal Family.

Queen Elizabeth II has appeared on Canadian stamps since the coronation issue was released in May 1953 and was also featured on several stamps while still a princess during the reigns of both King George V and King George VI.

The booklet of 10 stamps – printed by Lowe-Martin using five-colour lithography – and the official first-day cover (OFDC) are available now. The OFDC was cancelled in Ottawa.

Five Permanent stamps were issued as part of the second ‘From Far and Wide’ set.

Also released today was the second issue in the From Far and Wide series.

“The challenge is to establish a design platform that can be repeated, but that can also evolve,” said stamp designer Stéphane Huot. “In the ‘From Far and Wide’ series, the evolution is the result of the images chosen for the background of the souvenir sheet and a strong and distinctive color scheme that establishes the tone for the series.”

As a definitive issue, the From Far and Wide series includes stamps denominated with domestic, U.S., international and oversized rates and is available in booklets and coils. Postcards featuring the stamp images are also available along with a nine-stamp gummed souvenir sheet and souvenir sheet OFDC.

This set was also printed by Lowe-Martin using five-colour lithography.

Tombstone Territorial Park is featured on a Permanent stamp.

Yukon’s Tombstone Territorial Park was established as the result of the Tr’ondëk Hwëch’in land claim agreement, and the park lies entirely within that First Nation’s traditional territory.

The diverse landscape supports a variety of wildlife, including Dall sheep, caribou, moose, black and grizzly bears, and dozens of bird species.

Athabasca Falls is featured on a Permanent stamp.

Athabasca Falls, in Alberta’s Jasper National Park, is one of the most powerful waterfalls in the Canadian Rockies due to the sheer volume of its flow.

Fed by the Columbia Icefield, the 23-metre-high falls pour over hard quartzite and cut into the underlying limestone, carving potholes into the canyon below. 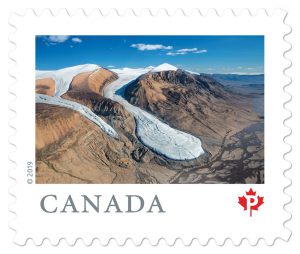 Quttinirpaaq National Park is featured on a Permanent stamp.

Nunavut’s isolated Quttinirpaaq (pronounced “koo-tin-ear-paahk”) National Park is at the top of the world, as its Inuktitut name proclaims. 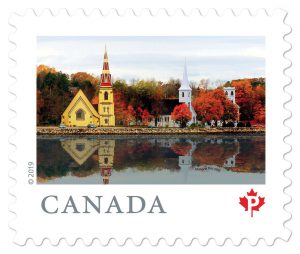 Mahone Bay is featured on a Permanent stamp.

Found on the west shore of Mahone Bay along Nova Scotia’s South Shore, the town of Mahone Bay was originally home to the Mi’kmaq people, which they called Mushamush.

Known for its shipbuilding history, visitors flock there to find three heritage churches that form part of the seaside area’s eye-catching scenery. 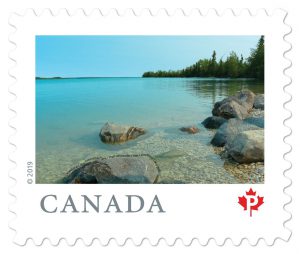 Little Limestone Provincial Park is featured on a Permanent stamp.

Little Limestone Lake Provincial Park, in north-central Manitoba, is the world’s largest and most outstanding example of a marl lake.

As the water temperature rises, the calcite separates and forms tiny crystals, which transform the lake from clear to an opaque turquoise or milky blue. 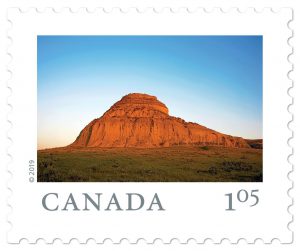 Castle Butte is featured on a domestic-rate stamp.

Castle Butte is a natural structure that was left behind in Saskatchewan’s Big Muddy Badlands after the last ice age.

The well-known landmark stands at 60metres high with a perimeter of half a kilometre. 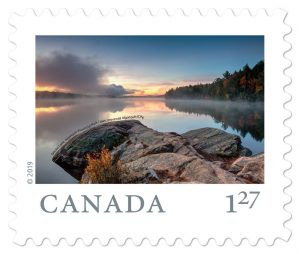 Algonquin Provincial Park is featured on a U.S.-rate stamp.

Over the years, the province’s oldest provincial park has been enlarged eight times. 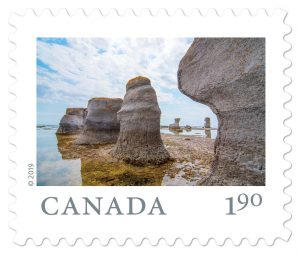 Following the last ice age, sediment and marine animal remains formed a seafloor of limestone in the St. Lawrence lowland, which was sculpted by continental drift and changing water levels into the Mingan islands and coastline. 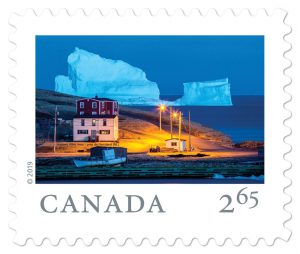 Iceberg Alley is featured on an international-rate stamp.

The annual southbound drift of 10,000-year-old icebergs has brought tourist attention to Iceberg Alley – the route that icebergs travel from the coast of Labrador to the southeast shore of Newfoundland.

The 1,800-nautical-mile journey down the Labrador Current to the Grand Banks and out into the Atlantic Ocean takes two to three years.