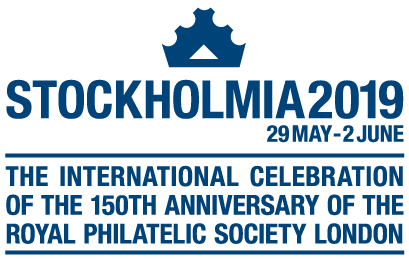 The international philatelic exhibition Stockholmia 2019 will be coming to Sweden next spring.

Planning is well underway for Stockholmia 2019, an international exhibition to be held May 29-June 2, 2019 at the Stockholm Waterfront Congress Centre as part of the celebrations to mark the 150th anniversary of The Royal Philatelic Society London (RPSL).

During the recent MonacoPhil 2017 exhibition, the RPSL held a reception during which Jonas Hällström, exhibition manager of Stockholmia 2019, presented a comprehensive report on what has been achieved so far.

“The preparations are forging ahead,” according to a statement issued by the RPSL, which added the venue’s 1,500-seat auditorium will be used for a daily RPSL presentation as well as for the opening ceremony. This will also be the location for the rarity auction conducted by the Global Philatelic Network on June 1, 2019.

In addition to the large auditorium, there are 15 rooms for society meetings, presentations and philatelic book releases.

Hällström also announced that both the Philatelic Congress of Great Britain and the Second World Cinderella Congress will take place during the exhibition.

Other notable events include the signing of the Roll of Distinguished Philatelists ceremony, the Congress of the Association Internationale des Journalistes Philatéliques (AIJP) and a meeting of the Association des Experts Philatéliques (AEP). The International Federation of Stamp Dealer Federations (IFSDA) will also conduct its congress at Stockholmia 2019.

“The Stockholm Waterfront Congress Centre will undoubtedly be buzzing with philatelic activities from the moment the exhibition opens,” adds the RPSL statement.

The Court of Honour will include material from the Royal Philatelic Collection shown by gracious permission of Queen Elizabeth II, the society’s patron, together with items from other royal collectors. This section will include documents, pictures, ephemera and more.

The exhibition’s philatelic patron, Gustaf Douglas, will also display his comprehensive Gold Medal Collection of Swedish Philately in the Court of Honour.

A large section has been set aside for the Stockholmia Library managed by Wolfgang Maassen, a well-known philatelic journalist and researcher. The library will feature a selection of RPSL publications and Crawford Medal winning titles from the Tomas Bjäringer philatelic library.

A series of lectures of interest to philatelic writers and publishers is in the planning stages. Also on the agenda are a number of lectures on philatelic literature on a worldwide sphere. It is hoped there will be as many as eight book presentations each day.

Maassen will also edit the two 300-page Stockholmia 2019 catalogues, one of which will be devoted to the exhibition itself. The key article by Mårten Sundberg will be a thorough account of the society’s current everyday activities: in 50 years’ time, when the RPSL celebrates its 200th anniversary, a reader of Sundberg’s article will be able to understand fully how the RPSL was functioning in 2019.

The second volume will be the Library Catalogue. Its contents will include reviews of all RPSL publications and the Crawford Medal winning titles from the Bjäringer library as well as all the competitive literature entries in the exhibition.

Hällström has also announced it’s possible the number of dealer stands will be expanded so attendees will be able to visit more than 50 dealers from around the world.