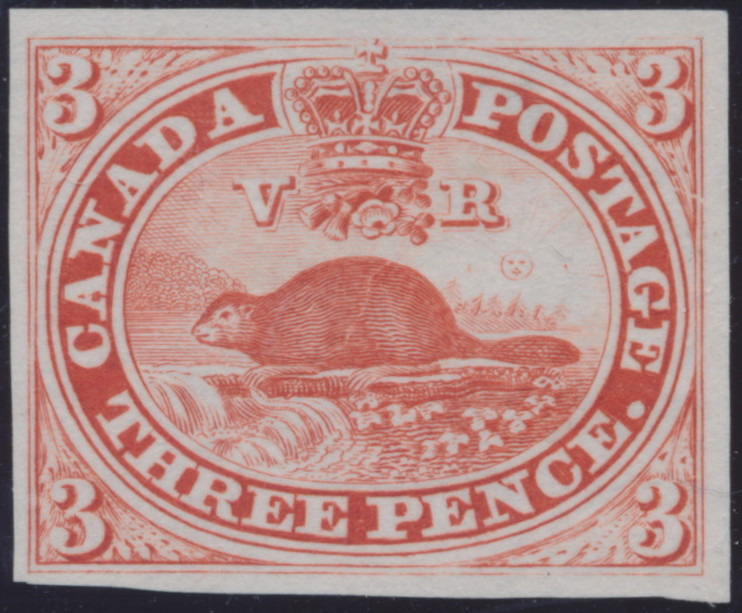 A three-penny beaver plate proof on India paper hammered down for $325 in Sparks' Auction #28 in 2018. (Photo by Sparks Auctions)

Also the world’s first pictorial stamp, it belongs to a series that includes a six-pence Prince Albert stamp (SC #2), issued May 12 of that year, and a 12-pence Queen Victoria stamp (SC #3), issued June 14.

Canada’s first stamp was commissioned when Great Britain turned over postal responsibility to its North American colonies more than 15 years prior to Canadian Confederation.

As a way to bolster its newfound independence, the Province of Canada issued the three-penny beaver two months after taking control of the post office.

Today, the gesture might be lost, but more than 160 years ago, when the tradition was to depict the Queen’s effigy on stamps, the three-penny beaver was a bold move.

Fleming chose the beaver because of its industrious nature and historical role in the Canadian fur trade. The design was one of the world’s first stamps to portray the wilderness and began a new Canadian tradition with nature as its national symbolic imagery.

The three-penny beaver was printed on laid paper, which was produced by spreading paper pulp over a wire sieve, allowing the water to drain. Like most early stamps, Scott #1 lacked perforations, so postal workers would cut them by hand upon their sale at the post office.