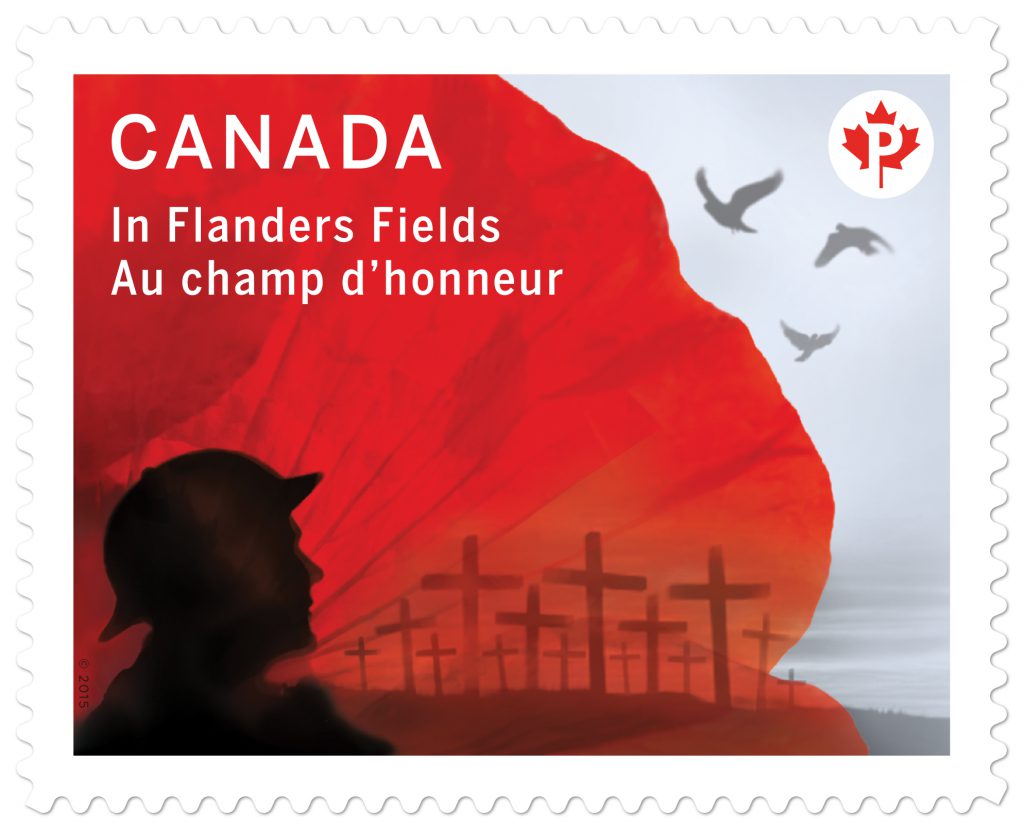 The 100th anniversary of John McCrae's famous poem, 'In Flanders Fields,' is marked on a 2015 stamp issued by Canada Post.

On today’s date in 1915, the poem In Flanders Fields was published in Punch magazine.

Written by Canadian doctor and Lieutenant Colonel John McCrae, the poem immortalized the poppy and inspired the adoption of handmade poppies to be worn in memory of those who died in the war. The commemoration is also used to raise money for veterans and their families.

In 2015, Canada Post unveiled a stamp (Scott #2835-36) to mark the 100th anniversary of McCrae’s poignant poem. Designed by Janice Carter and Tejashri Kapure, of q30 Design, the stamp highlights the poem’s now-iconic imagery, including rows of crosses, bravely singing larks and the fragile red poppy, which appears with the permission of the Royal Canadian Legion.

A five-stamp mini pane features the poem in the author’s handwriting in a version that varies slightly from that made famous by Britain’s Punch magazine. 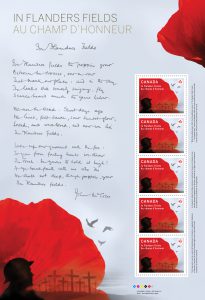 A five-stamp mini pane issued as part of the 2015 release features the poem in McCrae’s handwriting.

A stamp depicting McCrae was issued in 1968, 50 years after his death.

The pressure-sensitive stamps (SC #2836) measure 40 millimetres by 32 millimetres (vertical) and were issued in booklets of 10 stamps.

The stamps with water-activated gum (SC #2835) were sold only in shrink-wrapped packaging containing one pane of five stamps.

They were printed by the Lowe-Martin Group on Tullis Russell Coatings coated paper using six-colour lithography.

An official first-day cover was also serviced with a Guelph, Ont., cancel.

McCrae was an indirect casualty of war, dying on Jan. 28, 1918, of pneumonia and meningitis.