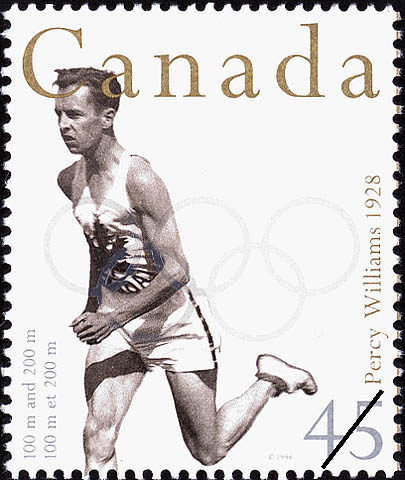 Percy Williams was celebrated on a 45-cent stamp issued by Canada Post as part of its 'Sporting Heroes' series in 1996.

On today’s date in 1908, Canadian athlete Percy Williams was born in Vancouver, B.C.

At the age of 15, Williams suffered from rheumatic fever and was advised to avoid any strenuous physical activity; however, because his high school required participation in athletic competitions, he began training in 1924.

Three years later, he became a local champion. The following year, at the 1928 Olympic trials, he won both the 100- and 200-metre races (he tied the Olympic 100-metre record of 10.6 seconds). He was also part of the Canadian team that was disqualified in the final of the 400-metre relay contest. 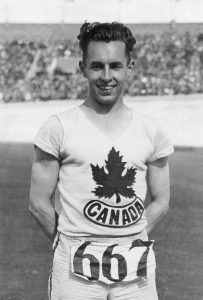 Unfortunately, at the British Empire Games, Williams suffered a pulled thigh muscle and couldn’t make a full comeback. At the 1932 Summer Olympics in Los Angeles, he was eliminated in the semi-finals of the 100-metre event.

Williams lived with his mother until her death in 1977, after which time he lived alone, suffering from arthritis and in considerable pain. A collector of guns, Williams eventually commit suicide by shooting himself with a gun he was awarded for his Olympic feat in 1928.

The stamps were printed by Ashton-Potter Canada using fluorescent coated paper and designed by Mark Koudis, of the Toronto-based Atlanta Art and Design, based on a photograph by Canada’s Sports Hall of Fame.

Koudis’ first work for Canada Post, the series features evocative sepia-toned photographs of these five prominent medalists with the athlete’s name, the event and year of victory prominent in the design. The five rings of the Olympics are faintly visible in the centre of each stamp.