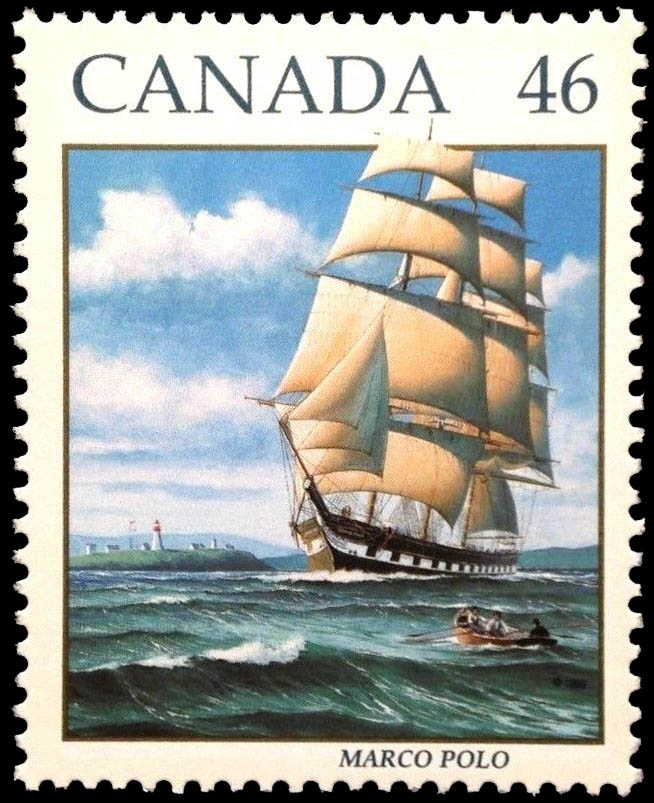 Canada Post commemorated the Marco Polo on a 46-cent stamp in 1999.

The Canadian-built clipper ship had the body of a cargo ship above the water line and the configuration of a much-faster clipper ship below. Its name was owed to Italian merchant Marco Polo, who was born in the Republic of Venice and known for his far-reaching travels.

Soon after it was launched, the ship set a new record for the fastest passage – 15 days – from St. John’s, Nfld., to Liverpool, England.

The following year, the Marco Polo completed her round-trip voyage between England and Australia in only five months and 21 days. It was the first time the voyage was completed in fewer than six months, according to Historica Canada, and the Marco Polo became widely known as the fastest ship in the world.

On March 19, 1999, as part of its Sailing Ship Marco Polo issue, Canada Post commemorated the Marco Polo on a 46-cent stamp (Scott #1779) as well as a two-stamp souvenir sheet (SC #1779a) that includes the 46-cent denomination and an 85-cent denomination.

The stamp’s design was based on a painting by marine artist J. Franklin Wright. It shows the Marco Polo under sail as it leaves Saint John.

Printed by Ashton-Potter on Tullis Russell paper, the stamp has general tagging along each side.