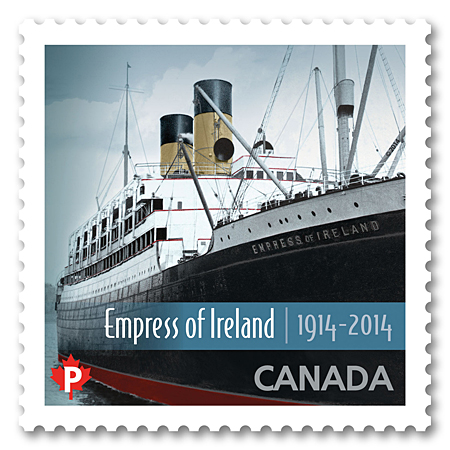 Canada Post issued two stamps (Permanent stamp shown) in 2014 to mark the 100th anniversary of the sinking of the Empress of Ireland.

On today’s date in 1906, the Canadian Pacific steamship Empress of Ireland launched in Belfast, Ireland.

Destined to carry passengers and mail between Liverpool and Québec alongside her sister ship the Empress of Britain, the Empress of Ireland was 174 metres in length with a beam extending more than 20 metres. The ship displaced 14,191 tons, and her service speed was 33 km/h with two propellers. She had a capacity of 1,580 passengers and crew.

On the morning of May 29, 1914, the Empress of Ireland collided with another ship and sank in the St. Lawrence Seaway, near Pointe-au-Père, Que.

After leaving port in Québec, the crew of the Empress sighted the Norwegian collier Storstad a few kilometres starboard. Both crews attempted to anticipate one another’s course as thick fog engulfed both ships, forcing Captain Henry George Kendall to bring the Empress to a stop. Minutes later, the Storstad emerged from the fog only 30 metres from the Empress, and the ships collided.

In 1999, the wreck site was classified as a historical and archaeological property, and it has since earned a protected status as a National Historic Site of Canada.

In 2014, Canada Post issued two stamps – a Permanent domestic-rate stamp plus an international-rate stamp – marking the 100th anniversary of the sinking of the Empress of Ireland.

According to Isabelle Toussaint, the designer for the domestic-rate issue, the story of the Empress was once lost to history—even locally.

“I was surprised to learn that this majestic ship was laying at the bottom of the St. Lawrence River at approximately 300 kilometres from Québec, my hometown,” she’s quoted as saying in Canada Post’s Details magazine.

Susan Scott, the designer of the international-rate stamp, was unaware of the Empress disaster until she was asked to submit a proposal for the stamp.

“I read David Zeni’s Forgotten Empress. I began working on ideas incorporating the sudden fog, which seemed the most significant factor in the accident,” she said. “I found many photographic and painted images of the Empress reproduced on old postcards and advertising leaflets of the time—and I drove along the St. Lawrence, to get a sense of place, to study the balance of water and sky.”