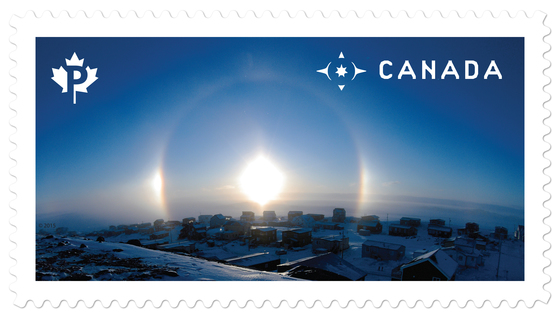 “It’s a sampling of all that Canadian stamps have to offer, and we hope you enjoy it,” said Jim Phillips, director of stamp services at Canada Post, which revealed its third set of stamps on UNESCO World Heritage sites, a Weather Wonders issue as well as a philatelic tribute to renowned author Alice Munro.

A photograph taken by Iqaluit’s Frank Reardon was one of five “weather wonders” featured in a new series by Canada Post. Reardon, who has been taking photos in the city for several years, said he captured a rarely seen “sun dog” in December 2010. The rare meteorological phenomenon is created when ice crystals form in the Earth’s atmosphere, scattering sunlight and creating a dazzling effect.

Each stamp in the series was chosen with help from Environment Canada’s senior climatologist, David Phillips, who said, “I marvel at the beauty – and violence – of weather in Canada, which these stamps spectacularly depict.”

Designed by Kosta Tsetsekas and Defne Corbacioglu, of the Vancouver-based studio Signals, the stamps are available in booklets of 10 stamps, souvenir sheets of five stamps and uncut press sheets of six souvenir sheets. The official first-day cover was cancelled in Toronto, Ont. Printed by the Canadian Bank Note Company on Tullis Russell coated paper using six-colour lithography, each stamp has a permanent-rate denomination.

“We used themed icons as a nod to the long history of weather iconography – the small suns, clouds and raindrops you see in your daily weather forecast,” explained Tsetsekas.

Corbacioglu added: “The icons add spice to the stamps without clouding the wonderful photography.”

“When I look at the new series of stamps, I am reminded of how much there is to explore in this vast country,” said Lara Minja, stamp designer. “This year’s series is a beautiful patchwork of differing landscapes, of textures and colours, of contrasts in scale and perspective, and of historical, geographical and cultural history.”

Printed by Lowe-Martin on Tullis Russell coated paper using four-colour lithography, the stamps are available in booklets of six stamps and souvenir sheets of five stamps. The official first-day cover was cancelled in Red Bay, Nfld.

Alice Munro, one of Canada’s most celebrated and beloved writers, was also featured on a permanent-rate stamp issued by Canada Post. Featuring a photo of the author taken by her daughter Sheila Munro and a vintage photo of Wingham, Ont. (the author’s hometown), the stamp also depicts the author’s handwriting over the image. The official first-day cover also features these elements and other images from the region; it was cancelled in Wingham. The stamp was designed by Marcio Morgado and art directed by Paul Haslip of HM&E Design. Printed by Colour Innovations, a new Canadian security printer hired by Canada Post, the stamps measure 23 mm x 32 mm (vertical) and were printed using seven-colour lithography.