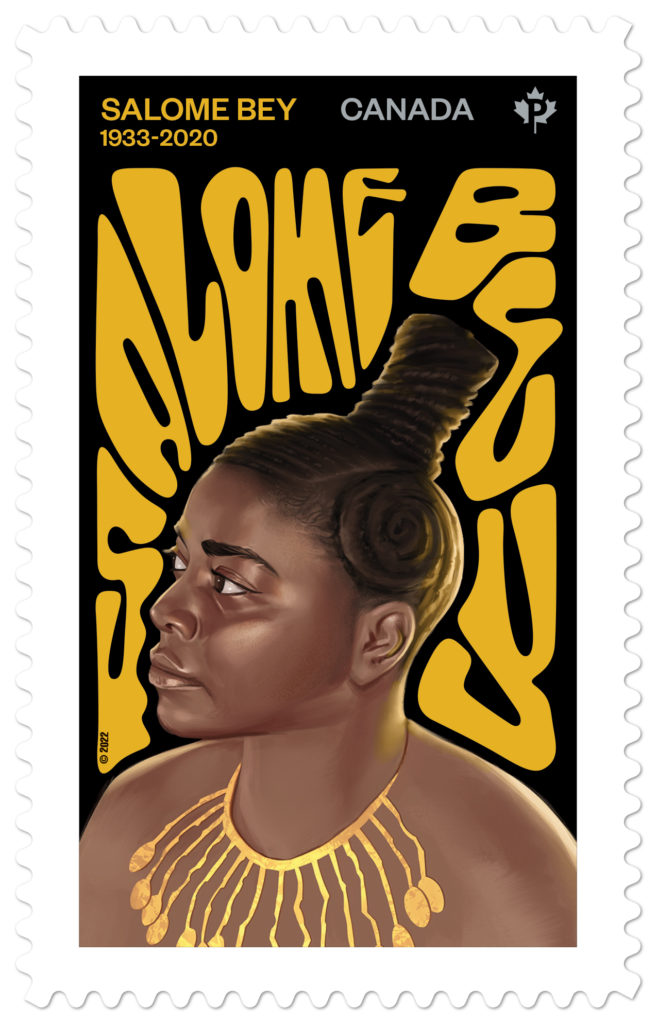 Also remembered as a composer, producer, director and actor, the Grammy-nominated Order of Canada member was widely revered for how she mentored young artists.

Montréal’s Paprika studio designed the Bey stamp with an illustration by Canadian-born Berlin artist David Belliveau based on a photo by award-winning Toronto Star photographer Doug Griffin, who – like Bey – died in 2020. Ottawa’s Lowe-Martin printed the new issue, which includes booklets of six Permanent domestic-rate stamps plus an official first-day cover serviced with a Toronto cancel.

Born in 1933 in Newark, N.J., Bey began her professional musical career in the 1950s touring North America and Europe with her brother and sister as Andy Bey and the Bey Sisters.

In the early 1960s, after meeting her future husband, Howard Matthews, in Toronto, she made Canada her home and pursued a solo career singing in a range of genres from blues to jazz to pop.

Bey’s talents were multi-faceted. She appeared in musicals, including the off-Broadway Love Me, Love My Children (Justine in Canada), for which she earned an Obie Award in 1972, and Broadway’s Tony Award-winning Your Arms Too Short to Box with God, which earned her and other performers a Grammy nomination for the original cast recording.

Beginning to write her own songs and musicals, Bey found more opportunities to work with Black performers. She wrote and starred in Indigo, a revue celebrating the history of Black music. The show, which ran from 1978-80, was a hit and earned her two Dora Mavor Moore Awards. Later filmed for TV, it aired on CBC in 1984. She also wrote and starred in 1983’s Shimmytime about U.S. performer Ethel Waters and wrote and directed 1985’s Madame Gertrude about blues legend Ma Rainey. Her celebrated children’s musical Rainboworld featured many young performers who later enjoy successful careers in the arts.

In 1985, Bey participated in the charity single “Tears Are Not Enough” in support of Ethiopian famine relief and was also a member of Artists Against Racism, an anti-racism non-profit organization. A year later, she served as a key organizer of and songwriter for the Toronto Arts Against Apartheid Festival, which – attended by then-Bishop Desmond Tutu – was held to protest South African apartheid and raise funds for Toronto charities.

Over her career, she received several major awards and honours, including a Toronto Arts Award (1992), the Dr. Martin Luther King Jr. Achievement Award from Montréal’s Black Theatre Workshop (1996) and the Queen Elizabeth II Diamond Jubilee Medal (2012). In 2005, she became an Honorary Member of the Order of Canada, and last year, she was inducted into Canada’s Walk of Fame.