'The Great Peace of Montréal' is commemorated on a 47-cent stamp issued by Canada Post in 2001.

On today’s date in 1701, Governor of New France Louis-Hector de Callière signed a peace treaty with 39 First Nations chiefs to end decades of fighting in what’s now referred to as “The Great Peace of Montréal.”

One of the most significant diplomatic events in North American history, the signing of the treaty officially ended the ongoing conflict and introduced a new era of peace between the French, their First Nations allies and the Iroquois.

On Aug. 3, 2001 – one day short of the 300th anniversary of the signing of the treaty – Canada Post issued a domestic-rate commemorative stamp (Scott #1915) to mark the monumental happening. 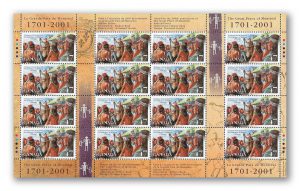 The 2001 ‘Great Peace of Montréal’ issue is available in panes of 16 stamps.

When Callière assumed power as New France’s governor, he faced a serious problem with the Iroquois, who were involved in beaver and fur trade rivalries with the French colony as well as Albany, N.Y.

Lengthy hostilities pitted New France and its allies against the Iroquois, against whom the French fortified their settlements, including Montréal, which was enclosed in a palisade.

In attempting to negotiate a treaty with the Iroquois, Callière needed to include all First Nations allied to the French; however, some of these tribes had been warring with the Iroquois longer than could be remembered.

After three years of negotiations, about 1,300 individuals from nearly 40 nations gathered in Montréal for a great feast.

Afterwards, Callière’s treaty was signed by officials of New France and agreed to by the chiefs of all attending nations.

A WINDOW INTO NEGOTIATIONS 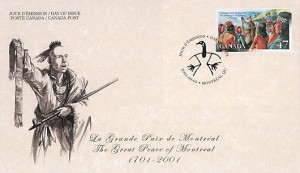 An official first-day cover is also serviced with a Montréal cancel.

Designed by Normand Tessier and Francis Back, both of Montréal, the 47-cent stamp features Back’s recreation of what the Great Peace negotiations might have looked like.

In the centre and facing viewers is the Ottawa Chief Hassaki alongside two Iroquois ambassadors in the left foreground, beside Onanguicié, the Potawatomi chief, and Louis Franquelin, the royal hydrographer of Québec. In the right foreground stands a chief from the Great Lakes and in the right background is Governor Callière.

Printed by Ashton Potter on Tullis Russell coated paper using six-colour lithography, the stamps have general tagging along each side.

Official first-day covers were also serviced with a Montréal cancel.