Scott McLaren served as the publisher of Canadian Stamp News and Canadian Coin News from 1977-87.

Scott McLaren, a former publisher of CSN and Canadian Coin News, died on Dec. 3 at the age of 69.

He began working at his father’s former printing company – McLaren, Morris & Todd, whose clients included Hallmark Cards and General Foods – at the age of 16.

His lifelong career in publishing and printing included ownership stakes in CCN, CSN, Antique Showcase, Gravenhurst News and his brainchild, Muskoka Life Magazine. They ran at different times under the banner of McLaren Publications, which he founded in 1977.

That year, the newly formed commercial printing firm also acquired CCN and CSN from Offset Make-Up, a Mississauga-based printing and production facility whose president was Don Thomas (another former publisher of CCN and CSN).

The two publications were created only a year earlier, when the former Coin, Stamp and Antique News was split in two.

Described by Thomas as an “eager and aggressive young man,” McLaren began as the publisher in March 1977. 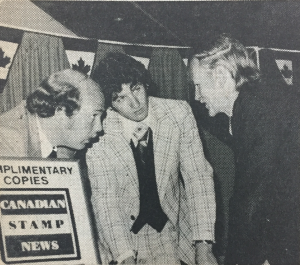 From left to right: McLaren talks with former CSN advertising representative Brad Bomans and dealer Frank Vogel at a show in the late 1970s.

“When I was a youngster I collected stamps, but as I grew older girls and hockey (in that order) captured my attention,” wrote McLaren in the March 7, 1977 edition. “However, although I’ve only been at my desk here for a few weeks, the number and variety of stamps sent to us from all over the world has me amazed.”

In 1984, McLaren also formed McLaren Press Graphics, a printing company focused on community papers and specialty publications, with his brothers Blair, who died in 2011, and Drew, who continues as the company’s president.

By 1987, McLaren sold CCN and CSN to Metroland Media Group, a division of the Torstar Corp., which owns the Toronto Star, then Canada’s largest daily newspaper.

Lasting only 19 months, Metroland’s stewardship of the publications was the shortest of all five publishers, including their current owner, Trajan Publishing Corp, which took over in 1989.

An avid bassist, McLaren enjoyed the blues and was also passionate about flying, sailing, fishing, tennis, photography and scuba diving.

A visitation was held at Cavill-Turner Funeral Home in Gravenhurst on Dec. 7 and was followed by a celebration of life.

Instead of flowers, McLaren’s family is encouraging donations to The Pines full-care facility in Bracebridge or the Canadian Parkinson’s Society.