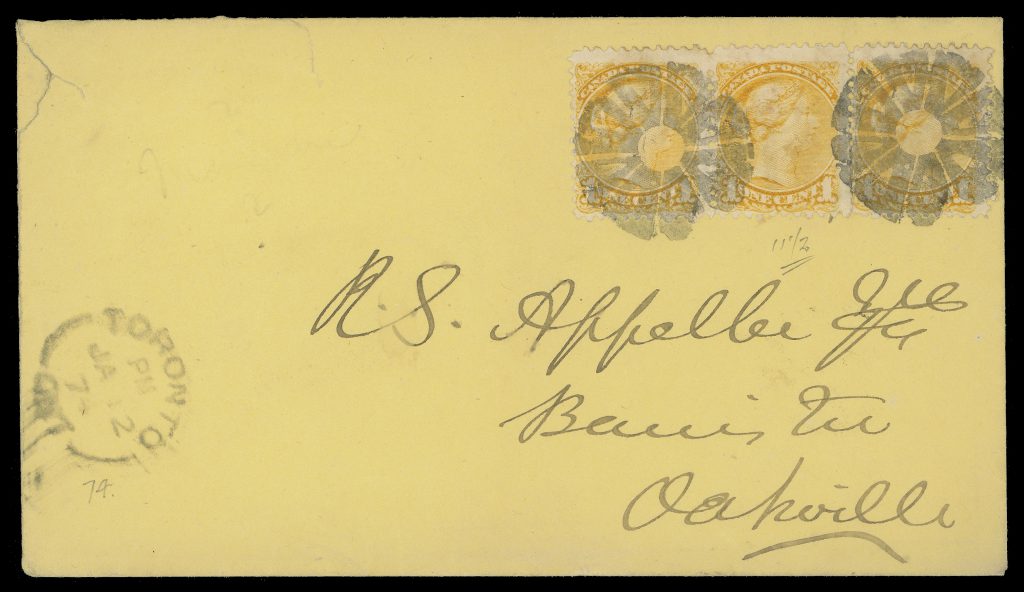 The final chapter in a Canadian stamp story will come to a close Feb. 25, when Eastern Auctions sells the final inventory of the Garcelon Stamp Company of St. Stephen, N.B.

The business, familiar to most old-time collectors, was formed in 1932 by Ralph O. Garcelon, a collector who discovered he enjoyed buying and selling stamps more than collecting them.

At first he worked out of a room on the family farm, but by the 1950s the company had its own building and more than 60 employees. The company continued to grow, moving into a larger building in 1962.

Much of Garcelon’s business was done in the United States. St. Stephen is a border town, and Garcelon used a post office box in Calais, Maine, to sell U.S. stamps to customers. He was an aggressive advertiser, appearing in newspapers, magazines, and comic books all over North America.

At its peak, the company had 150 employees, still based in a town with a population of only 3,500. Mail was taken to the post office twice a day. According a write-up on the Garcelon Stamp Company inside the auction catalogue, one mailing alone weighed more than five tons.

The company specialized in selling multiple versions of the same set by approval.

“The amount of stamps that the company handled was truly amazing,” writes Eastern Auctions’ Gary Lyon. “For example, one packet they sold contained fifty different Yugoslavian stamps. Purchased in full sheets, the stamps had to be manually separated, sorted and packaged. One hundred thousand packets were assembled – a total of five million stamps.”

“Ralph believed in the honesty of people and the low amount of losses proved him correct,” Lyon adds.

In 1957, J. William (Bill) Garcelon joined his father’s business, operating as Williams Stamp Company. After the death of Ralph in 1972, the two companies were merged and continued to operate into the 1980s. The cheaper and bulkier materials – taking up to two semi-transports – were sold to a stamp wholesale company in the United Kingdom.

Lyon said most of the individual stamps have a catalogue value of two dollars or more.

“Some minor errors in count or cataloguing are to be expected, however we have examined a considerable percentage of the glassines in each lot and corrected any obvious errors.”

He added he does not believe they have been checked for varieties, making it possible the lots will contain premium quality stamps, better shades, postmarks, varieties, and special interest items.

Eastern Auctions’ Bill Burden said one of the highlights of the sale is the nearly 100 lots of fancy cancels. The cancels come from a comprehensive collection, formed with emphasis on rarity and clarity. Many of the covers are provenance to the famed Hennok Collection.

Lot 343 is a single town name cancel with Mikado, Sask, in large letters straight-line over a single one-cent green and four three-cent brown Admirals Unitrade #s104, 108. The cover further has a split ring dispatch mark below and an oval R registered mail cancel. It was mailed to Saskatoon and has an arrival back stamp. Described as VF, it has an estimate of $200.

The Canadian section of the sale is extensive and includes a large inventory of Mint Never Hinged stamps with a catalogue value of nearly $750,000. Appearing as Lot 662, the stamps are packed in 14 filing boxes and organized by Scott number. In total there are more than 240,000 stamps in this single lot. The pre-sale estimate is $50,000.

The sheets, which are rarely seen, contain 19 proofs, printed in deep green on India paper. Examples contain representatives of the Province of Canada, New Brunswick, Newfoundland, Nova Scotia and seven Latin American countries. It was produced in 1868. Described as “undoubtedly among the finest known of the very few remaining,” it has a pre-sale estimate of $20,000-plus.

“That’s not for everyone, but it is a special thing for sure,” Burden said.

There is also a run of OHMS overprints, and revenues.

The errors section include Lot 602, a remarkable imperforate lower right inscription block of four Queen Elizabeth II 47-cent, 2000, Unitrade #1683a. Described as VH and NH, it has an estimate of $2,000.

The British North America and Newfoundland part of the sale contains nearly 100 lots.

The section is strong on sheets, die proof and early Newfoundland airmail is well represented.

Lot 176 is spectacular complete set of plate proofs of 100 of the 1860 New Brunswick issue. All six denominations from one cent to 17 cents are present with the two cent, 14 cent, and 17 cents showing an American Bank Note Co., New York, imprint. Described as the only known set still intact, it is provenance to the Sir Gawaine Baillie collection, and carries an estimate of $15,000.

The Newfoundland stamps include a rare intact sheet of 50 of the 1887 10-cent Schooner, Unitrade #59 with full imprints top and bottom. The sheet includes several varieties and is also from the Baillie collection. Lot 227 has an estimate of $7,500.

Early airmails include a number of scarce items.

Lot 245, a June 14, 1919, cover mailed from Harbour Grace, N.L. and carried on the Kerr and Brackley pioneer flight on a Handley-Page flight, has a 15-cent scarlet with one dollar airmail overprint (Unitrade #C2a), with a Handley Page backstamp. Just 119 pieces of mail were carried on the flight, and not all of the stamps in this lot have the back stamp. This lot has an estimate of $1,500.

While Eastern Auctions sales usually cover more than one day, this sale is taking place in just one. It is scheduled for the afternoon of Feb. 25, at the Lord Nelson Hotel, 1515 South Park St. Halifax, N.S., with viewing the morning of the sale as well as from 9 am to 7 pm the day prior.