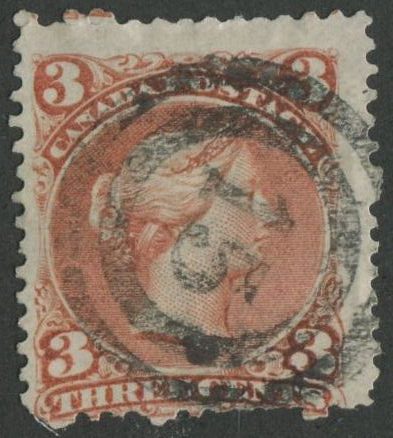 Found in the website’s online resources and exhibits section, the articles include a listing of the earliest recorded use of each of the 60 two-ring numeral cancels and a census of more than 7,000 1868 Large Queen covers, all sorted by postal rate and destination.

The first, entitled “Early Use of Two-ring Numeral Cancels on the Large Queen Issue,” explains two-ring numeral cancels began appearing about a year after the Large Queen definitives were issued on April 1, 1868, and continued into the Small Queen period.

“The obliterators were issued to 60 post offices. While the numbering sequence generally appears to be based on post office revenue, there are exceptions,” writes Smith, who added the list was compiled this October. “The post offices to which the numbers were allocated were found from covers bearing the two-ring obliterator and a post office cancel. The post offices for numbers 17 and 20 are still not known.”

The second article, entitled “Census of Large Queen Covers by Rates,” begins with domestic mail (with more than 4,600 covers) before listing foreign mail to Newfoundland (more than 40 covers), the U.S. (1,400 covers), Great Britain (nearly 1,000 covers) and other foreign destinations broken down by country (more than 200 covers).