For the first time in nearly 40 years, the annual convention of the British North America Philatelic Society (BNAPS) has returned to Québec.

BNAPEX 2018, which opens today and runs until Sept. 23 at the Hotel Plaza Québec, is the 70th consecutive BNAPEX convention since the inaugural show in 1949, when it was held in Buffalo, N.Y.

“The last show in ‘la belle province’ was held at the Château Frontenac in 1979,” said BNAPEX 2018 co-chair Grégoire Teyssier, who’s a Fellow of The Royal Philatelic Society of Canada (RPSC). 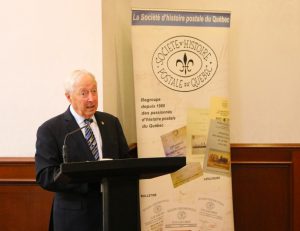 “We’ve been working on the convention for a year now, and it’s so much fun to organize and bring the BNAPS family to Québec,” said BNAPEX 2018 advertising and publicity chair Hugo Deshaye, who’s also the owner of Hugo Deshaye (Philatelist) Inc.

“The destination as well as the strength and trust in the committee are the main reasons why people are saying, ‘I’m coming for sure, whatever the cost.’ This can be a solitary hobby, so a convention like this one is great to share knowledge, discoveries and certainly help your research.”

“The 20-dealer bourse will have a myriad of philatelic material from British North America (BNA), the U.S. and worldwide, including postal history, covers and postcards as well as supply and revenue,” said Teyssier, who has previously worked as a consultant for the now-defunct Canadian Postal Museum as well as the Canadian Postal Archives and Parks Canada.

The 160-frame competitive exhibition will feature 44 exhibits covering the gamut of BNA philately.

“The exhibits are very strong with many very elusive topics,” he said, adding the exhibits feature BNA topics exclusively.

A “Travelling Postal Museum” curated by Teyssier will also be displayed in the hotel’s lobby.

“To our knowledge, it is the first time BNAPEX will have a postal museum in the lobby,” he said. “The FQP will also have a huge youth philately booth in the lobby of the show, and dozens of future BNA collectors will attend the convention, too.”

A full slate of meetings and seminars are also planned for the three-day show.

“Attending the meetings and seminars is a great way to make face-to-face contact with people collecting exactly what you’re collecting,” said Teyssier.

BNAPS hosted its annual board of directors meeting yesterday. This will be followed by a pair of seminars and meetings today and about a dozen each on Sept. 22 and Sept. 23.

Some of the highlights include tomorrow’s “Librarians” seminar, which will be held from 2 p.m.-3 p.m. and include representatives from Library and Archives Canada, the Vincent Graves Greene Philatelic Research Foundation and the American Philatelic Research Library. The focus will be on the philatelic research possibilities of their respective libraries as well as means of access.

The following morning from 8 a.m.-9 a.m., BNAPS will host its annual general meeting.

The venue is located in the suburb of Sainte-Foy, which is home to the Aquarium du Québec and Parc Nautique de Cap-Rouge, a park with views over the St. Lawrence River.

“We have organized a great convention with dozens of seminars; many regional and study group meetings; and three great tours, including a guided tour of ‘La Citadelle’ and Old Québec, a culinary experience with eight restaurant tasting menus and a scenic cruise along the St. Lawrence River from Cap Diamant to Montmorency Falls in front of the Island of Orleans.”

On the evening of Sept. 22, there will be a “very special” fine cuisine dinner and cocktail party at Huron-Wendat Hôtel Nation in nearby Wendake, which is only a 20-minute drive from the venue in Sainte-Foy.

Two of the tours are fully booked, and there are more than 100 BNAPS members registered to attend this year’s convention.

“Members are from all over Canada, the U.S. and England,” added Deshaye, who’s also the show’s BNAPS liaison.

The host clubs of this year’s show are the Société d’histoire postale du Québec and the Fédération québécoise de philatélie.