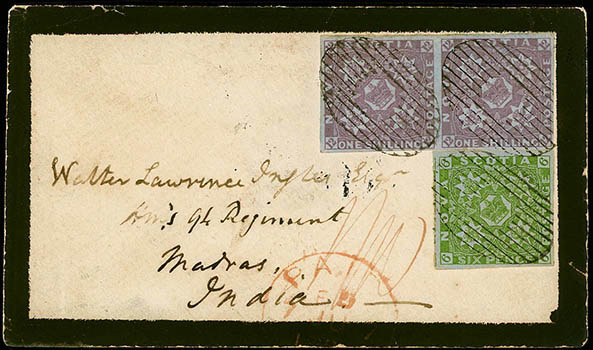 Next week, a collection of Nova Scotia postal history is slated to take over Los Angeles, Calif., at the 72nd Annual Stamp Exhibition of Southern California (also known as “Sescal” in So-Cal stamp circles).

Schuyler Rumsey Philatelic Auctions, of San Francisco, Calif., is slated to take part in the two-day exhibition this Sept. 23-25 with two mammoth sales, one of which—Public Auction No. 70—will see the Skywalk Collection of Nova Scotia stamps and postal history cross the auction block. Bidding for the 427-lot sale begins at 10 a.m.

The sale’s defining highlight is Lot 375, an 1853 mourning cover sent from Sydney, Cape Breton to Madras, India bearing an 1851 six-pence yellow-green (Scott #4) and one-shilling dull violet (SC #7) horizontal pair, which auctioneers describe as “simply a stunning first issue usage.” Both stamps have “beautiful, large and well-balanced margins, each tied by centrally struck oval grid cancel, leaving crown of stamp free as intended with this cancel.” This Very Fine example, which is accompanied by a 1982 Royal Philatelic Society of London (RPSL) certificate, is estimated at $75,000-$100,000 USD (about $135,650 Cdn.).

Another exceptional piece of Nova Scotia postal history is Lot 346, the earliest recorded use of Great Britain’s first issue to British North America, the Penny Black. The cover, sent from London, England to Digby, N.S. in May 1840, includes 13 single Penny Black stamps and two strikes of the red London “G, Paid, 16 MY 1840” tombstone and matching “PUT IN: AFTER / 7 o’CLOCK AT NIGHT” double-framed handstamp. This Very Fine example is accompanied by a 1998 BPA Expertizing certificate. It also has a pre-sale estimate of $75,000-$100,000 USD (about $135,650 Cdn.).

According to auctioneers, the letter’s sender hoped it would make the maiden voyage of the Unicorn, which departed May 16, 1840, on the first trans-Atlantic voyage of the [Samuel] Cunard Line. It was posted too late and was instead sent by the Black Line sailing ship North America.

‘WONDERFUL’ NOVA SCOTIA #7 USE TO IRELAND 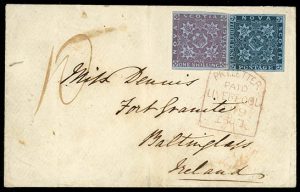 This Very Fine example is accompanied with a 1970 RPSL certificate.