Attendees of this year’s Convention of The Royal Philatelic Society of Canada were treated to a high-quality bourse and an exceptional display of exhibits according to society president George Pepall.

The 88th convention of the Royal Philatelic Society of Canada (RPSC) has come to a close, and its success reflects a similarly strong year for “Canada’s national stamp club.” RPSC president George Pepall, who’s also treasurer of the Kitchener-Waterloo Philatelic Society (KWPS), host club for this year’s event, said upwards of 600 attendees were treated to top-level exhibits and a high-quality bourse over the Aug. 19-21 weekend. “We had a post-Royal meeting, and the overall perception of the event was very positive,” said Pepall. “We had fewer dealers than we would have wanted because of the very unusual timing of the event in August, but we got such good feedback from the dealers, about their sales and what they had to offer, that we’re happy for them.” Continue reading →

After a short time in the world of stamp collecting you start to take certain things for granted, things that don’t always make sense to the rest of the world. I sat down and made a list of the weird things about this philatelic world, and decided to share my top five: 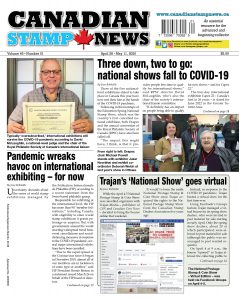