The 100th anniversary of John McCrae's famous poem, In Flanders Fields, is marked on a 2015 stamp issued by Canada Post.

Following the First World War, the poppy became a profound symbol of war-time remembrance in many countries, including Canada.

Throughout November, people around the world remember the sacrifices of fallen heroes by wearing a poppy, whose association to those killed in conflict dates back to the Napoleonic Wars of the 19th century, when the red flower bloomed in war-torn fields where countless soldiers died. This year marks the poppy’s 100th anniversary as a remembrance symbol in Canada.

During the First World War, in Flanders Fields, the upturned soil exposed dormant corn poppy seeds – a common weed in the grain fields of Europe – to the light it needed to grow.

A five-stamp mini-pane issued as part of the 2015 set features In Flanders Fields in McCrae’s handwriting.

In 1915, Canadian doctor and Lieutenant Colonel John McCrae immortalized the poppy in his famous poem, In Flanders Fields, which inspired the adoption of handmade poppies to be worn in memory of those who died and to raise money for veterans and their families.

A century later, Canada Post unveiled a stamp to mark the 100th anniversary of McCrae’s poignant poem. Designed by Janice Carter and Tejashri Kapure, of Toronto’s q30 Design, the stamp is based on iconic imagery inspired by the poem, including rows of crosses; bravely singing larks; and the fragile red poppy, which appears with the permission of the Royal Canadian Legion.

A five-stamp mini-pane features the poem in the author’s handwriting in a version that varies slightly from the one made famous by Britain’s Punch magazine.

The issue, which measures 40 millimetres by 32 millimetres (vertical), is available in booklets of 10 stamps. A five-stamp mini pane includes water-activated gum.

An official first-day cover was also serviced with a Guelph, Ont., cancel.

As part of the 2015 In Flanders Fields release, an official first-day cover was serviced with a cancel from Guelph, Ont.

McCrae was an indirect casualty of war, dying on Jan. 28, 1918, of pneumonia and meningitis.

Also in 1968, the Post Office Department issued a 15-cent stamp marking the 50th anniversary of the armistice of the First World War.

The stamp depicts “The Defenders and the Breaking of the Sword,” one of many sculptured groups decorating the Canadian Vimy Memorial, which is located on Vimy Ridge, near Arras, France.

Designed by W. S. Allward, of Toronto, the memorial has classic twin shafts that dominate the French countryside. 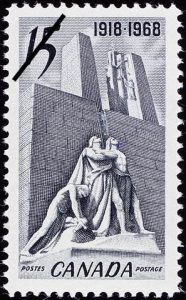 A 15-cent stamp issued in 1968 marks the 50th anniversary of the First World War armistice.

‘WAIT FOR ME DADDY’

In 2014, Canada Post issued a Permanent stamp in commemoration of the “Wait for Me Daddy” photograph—a spontaneous burst of affection and excitement frozen in time by a newspaper photographer’s lightning-fast reflexes.

Accented with poppies, the stamp centres on a story from the Second World War.

On Oct. 1, 1940, Private Jack Bernard and other volunteers in The British Columbia Regiment (Duke of Connaught’s Own Rifles) were marching smartly down Eighth Street in New Westminster, B.C., to board a ship and sail off to war. Suddenly, Bernard’s five-year-old son broke free of his mother’s grasp and sprinted into the military formation to take his smiling father’s hand.

In that instant, Vancouver Daily Province photographer Claude Dettloff snapped his camera’s shutter. Soon, his unforgettable image of little Warren “Whitey” Bernard was being printed by leading publications throughout North America. It was later used in Canada’s war bond drives with the plea, “help bring my Daddy home.”

In 2009, Canada Post issued a Permanent stamp depicting the iconic ‘Wait for Me Daddy’ photograph.

“It is an honour to recognize this historic photograph, which touched so many Canadians during a global and prolonged conflict that touched and changed countless families,” said Lisa Raitt, then minister of transport. “It’s a reminder that wars are hard not only on people who serve in uniform or overseas, but also on their loved ones, safe at home on our country’s soil.”

“Our stamps are carefully chosen to reflect Canada’s rich history,” added Deepak Chopra, then president and CEO of Canada Post. “The ‘Wait for Me Daddy’ stamp serves as a reminder of the hundreds of thousands of Canadian families who watched people they loved leave home to serve their country.”

The Wait for Me Daddy stamp measures 29 millimetres by 36 millimetres and was printed by the Canadian Bank Note Company on Tullis Russell paper using six-colour lithography.

The issue is available in booklets of 10 stamps as well as framed and unframed souvenir sheets.

An official first-day cover was also serviced with a New Westminster cancel.

A five-cent stamp issued in 1968 marks 50 years since McCrae’s death.

Designed by Toronto’s Context Creative, the stamp features a close-up photograph of the National War Memorial in Ottawa.

“We really seized the opportunity to revisit this wonderful sculpture,” said Creative Director Lionel Gadoury, who led a presentation with Canada Post Stamp Design Manager Liz Wong at the National Postage Stamp and Coin Show in 2017.

“It conveys a strong sense of humanity, with people coming together from all walks of life and sacrificing for what they believe in. The sculptor, Vernon March, was very clear that it was not to be a monument to the glory of war, but to the commitment of Canada’s soldiers. We sought to convey this message on the stamp.”

A 2009 stamp also issued by Canada Post depicts a poppy in the lower-left corner.

The stamp and the inside of the booklet depict vibrant red poppies. On the stamp, the two figures of the National War Memorial represent the camaraderie of peacekeeping efforts.

“We decided to infuse a new sense of vitality into this traditional emblem by showing real poppy flowers instead of felt pins,” said lead designer Michael Wandelmaier. “As a fresh, organic element, the poppy captures the feeling of renewal and hope we sought to convey. The way they’re shown blowing in the wind inside the booklet, on the other hand, speaks to the transience and fragility of life.”

The signature “V” (for “Victory”) in the stamp’s background (also featured on Canadian five-cent coins from 1943-45) expands on the theme of hope and pride.

“This graphic element is a reminder that Canada’s wartime efforts have not been a fruitless struggle; much benefit has come from our military involvement in the world,” added Gadoury.

Canada Post issued a stamp marking the 100th anniversary of the First World War armistice in 2018.

After more than four years of bitter struggle, the fighting in the Great War came to an end on Nov. 11, 1918—on “the 11th hour of the 11th day of the 11th month.” The newly issued Permanent stamp celebrates the silencing of the guns while commemorating those who fought and died for peace. Of the more than 650,000 Canadians who served with the Allies, more than 66,000 were killed and 172,000 were wounded.

“To us, the armistice was less about the moment of its signing than the lasting peace it brought,” said artist Larry Burke, who was joined by Anna Stredulinsky, both of Halifax’s Burke and Burke, and illustrator Jillian Ditner in designing the new issue.

A dove – a universal symbol of peace – is depicted at the centre of the stamp within a devastated landscape. Hovering over barbed wire, which is highlighted with a spot varnish effect, it serves as a poignant metaphor for the return of peace to a war-torn world. The photos of the celebrations in 1918 were selected for the booklet, pane and official first-day cover to convey the relief, joy and hope Canadians felt when the fighting stopped.

Designed by Québec artist Réjean Myette, the Permanent domestic-rate stamp reproduces Trenches on the Somme, one of about 350 works produced by Hamilton between 1919 and 1922. Her work comprises the largest collection of Canadian First World War paintings by a single artist according to the 2017 book, No Man’s Land: The Life and Art of Mary Riter Hamilton, 1868-1954, by Kathryn Young and Sarah McKinnon.

“I made up my mind that where our men went under so much more dreadful conditions, I could go, and I am very proud to have been able even in a small way to commemorate the deeds of my countrymen, and especially if possible to lend a helping hand to the poor fellows like those of the Amputation Club who will be life-long sufferers from the war,” Hamilton said in a 1922 interview with the McClure Newspaper Syndicate.

Canadian artist Blair Thomson designed the new poppy issue, which marks its centennial as a symbol of remembrance.

In late October, Canada Post marked on a new stamp the 100th anniversary of the official adoption of the poppy as a symbol of remembrance in Canada.

The new issue coincided with the launch of the Royal Canadian Legion’s National Poppy Campaign, which begins on the last Friday of October each year.

“The concept behind this special stamp was not only to immortalize the crimson flower but also to give Canadians another way to honour the more than 117,000 Canadians who have died in service to their country,” said Canada Post media relations manager Eunice Machuhi.

Earlier in the month, the Crown corporation commemorated three First World War soldiers who each received the prestigious Victoria Cross for their bravery and sacrifices while living on what was then called Pine Street in Winnipeg. Renamed Valour Road in 1925, the iconic three-kilometre street in Winnipeg’s West End was home to Corporal Leo Clarke, Sergeant-Major Frederick William Hall and Lieutenant Robert Shankland, who all lived on the same block.

“This story is one of ordinary Canadians responding to the call of duty, going overseas to serve their country,” Tony Glen, the director of exhibitions, creative development and learning at the Canadian War Museum, told Global News in 2014. “These three distinguished themselves in extraordinary ways.”

After the war, Armistice Day was observed on a Monday in early November until 1931, when a campaign led by the Canadian Legion resulted in a fixed date of Nov. 11 as well as a new name—Remembrance Day.

Every year on this day, when the clock strikes 11, Canadians observe two minutes of silence in honour of the brave individuals who served Canada in times of war and peace.