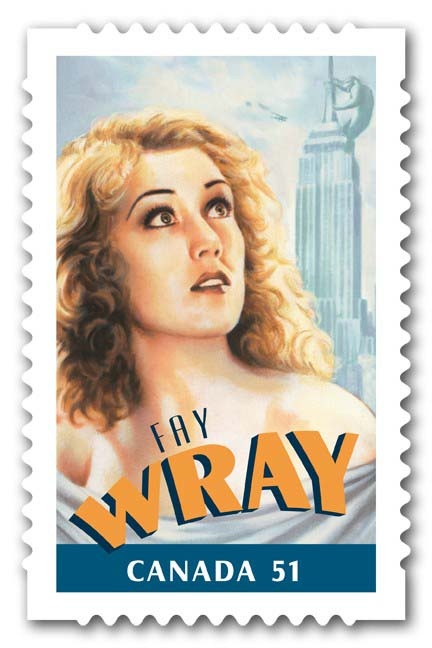 Fay Wray’s portrait is featured alongside a scene from King Kong on a 51-cent stamp issued by Canada Post in 2003.

King Kong premiered at Radio City Music Hall and Roxy Theatres on March 2 of that year.

Nearly six decades later, in 1991, the movie was deemed “culturally, historically and aesthetically significant” by the U.S. Library of Congress and selected for preservation in the National Film Registry.

With 54 reviews and a 98 per cent “fresh” rating, the film is currently listed in the seventh spot on Rotten Tomatoes‘ Top 100 Horror Movies and #48 on its Top 100 Movies of All Time.

Wray, who was born in 1907 Cardston, Alta., played Ann Darrow in the 1933 flick. Darrow is kidnapped by a group of natives and offered to the gigantic, prehistoric, island-dwelling ape named Kong.

The Wray stamp features the iconic actor’s portrait alongside a scene from the movie that defined her career, King Kong. Also commemorated in this issue were John Candy (SC #2154a), Mary Pickford (SC #2154b) and Lorne Greene (SC #2154d).

Best known as the heroine in the hands of the infatuated ape Kong, Wray also starred alongside Gary Cooper, Joel McCrae and Henry Fonda.

A commemorative folder was also issued with two stamps of each of the four actors plus 12 miniature seals.

“Celebrating Canadian accomplishments is a prime component of the Canadian stamp program,” said John McCallum in 2006. “We have shared our great wealth of talent with the world in many venues. With this stamp, and the others in the set, we again celebrate our homegrown stars and their place on the world stage.”

During her childhood, Wray moved to Arizona with her family; however, by the age of 14, she went to California with the hopes of starting a career in film. It wasn’t long before she began picking up small parts in westerns and comedy shorts.

In 1926, Erich von Stroheim cast Wray as the female lead in The Wedding March, which was her own all-time personal favourite role. She then played opposite Cooper in the war drama Legion of the Condemned and was re-teamed with him for 1928’s The First Kiss.

But it was the classic “beauty and the beast” film, King Kong, which secured Wray’s place in film history.