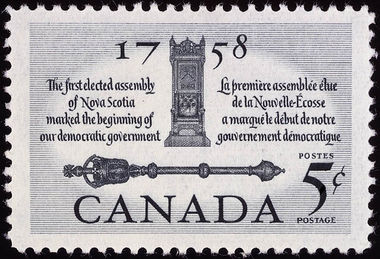 The first meeting of the Nova Scotia House of Assembly, the first elected legislature in Canada, was commemorated on a five-cent stamp issued in 1958.

On today’s date in 1755, Charles Lawrence, lieutenant governor of what was then the British colony of Nova Scotia, sent instructions to Colonel Robert Monckton to expel the Acadians from Canada’s present-day Maritime provinces.

The Acadians were the descendants of French settlers and Indigenous people living in Acadia, an early colony of New France established in 1604, during the 17th and 18th centuries. Although they claimed neutrality, the Acadians were seen as a threat to British officials, including Lawrence, who noted there were nearly 300 Acadian militia inhabiting the French Fort Beauséjour during its 1755 siege.

“In meetings with Acadians in July 1755 in Halifax, Lawrence pressed the delegates to take an unqualified oath of allegiance to Britain,” reads The Canadian Encyclopedia. “When they refused, he imprisoned them and gave the fateful order for deportation.”

Three years later, amid the Acadians’ bloody expulsion, which lasted until about 1764, Lawrence convened the first meeting of the Nova Scotia Legislature in the Halifax Court House. The legislature sat until April 11, 1759, and was dissolved later that year on Aug. 13.

Its members – elected in 1758 – were the first popularly elected parliament in Canadian history.

The stamp, which depicts the assembly’s mace and speaker’s throne, was printed by the Canadian Bank Note Company.

By the end of the 1750s, some Acadians fled France to settle in Louisiana, which was then a French colony but was later given to Spain towards the end of the Seven Years’ War. In 1763, as part of the Treaty of Paris, Louisiana was ceded to Britain.

Some Acadians fled to other U.S. colonies like Massachusetts, Maryland and Virginia while more still returned to British territories such as Prince Edward Island.