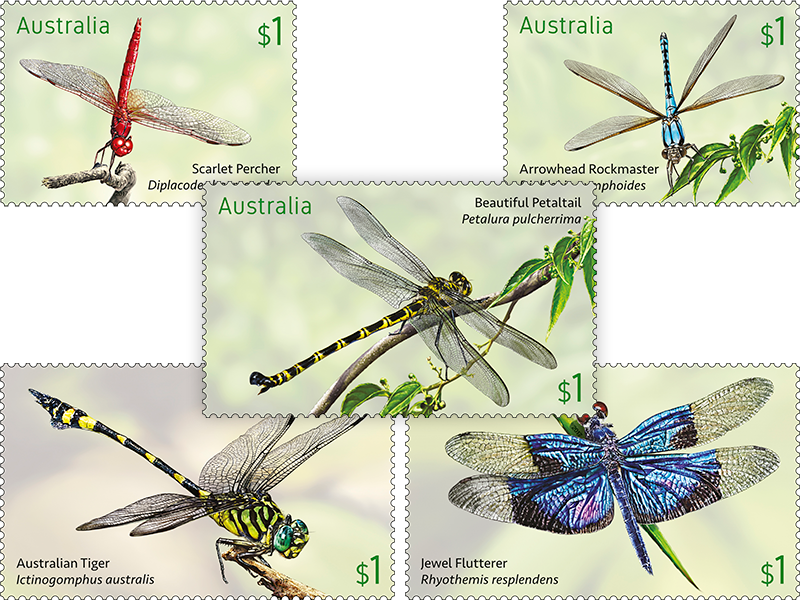 According to the Australia Post website, Stamp Collecting Month “provides an exciting way for middle to upper primary school students (and their teachers) to engage with interesting themes through stamps.”

Dragonflies, which belong to the order Odonata, are among the most captivating creatures of the insect world.

Faster than most other flying insects, they hover weightless mid-air before darting at speed, which in the case of some species can be up to 70 kilometres an hour.

Carnivorous flying insects that mainly inhabit areas near still or running freshwater sources, dragonflies signal the health of the local ecosystem. Depending on the species, adults will have a lifespan of between a few weeks and a year.

The dragonfly is an ancient group of fauna that predates dinosaurs. The original dragonflies were among the first winged insects to develop, with fossilised specimens from the Carboniferous period indicating they could possess a wingspan of up to 75 centimetres.

Across geological eras, this amazing adaptor has been successful in part because of its well-developed eyes and capacity for flight. Today’s much smaller dragonfly belongs to an order that has taxonomically diversified into around 6,000 known species worldwide. Australia has five giant species (petalurids), this group having been around for about 190 million years and probably being the oldest extant family.

The dragonfly is historically significant to Australia. It was the country’s first faunal species to be described, after a specimen was collected by Joseph Banks at Endeavour River, when James Cook’s ship was grounded in Queensland for repairs in 1770.

Although this stamp issue is titled Dragonflies, it represents two suborders of Odonata. The Arrowhead Rockmaster is the sole damselfly represented, and the issue also includes one giant dragonfly, the Beautiful Petaltail. This selection of Australian dragonfly species is based on their visual and taxonomic diversity—each belongs to a different genus, spanning four families.

The designs show male dragonflies, which are often more spectacular in colouration than females, according to Australia Post. The bright and life-like stamp illustrations were produced by Owen Bell.

The Scarlet Percher and Arrowhead Rockmaster stamps measure 37.5 mm by 26 mm while the remaining stamps measure 50 mm by 30 mm. Each stamp was printed by EGOtrade using offset lithography.

Australia Post is offering the stamps in several formats, including a “minisheet” including all five of the stamps; coils of 100 stamps; and booklets of 10 stamps and 20 stamps.