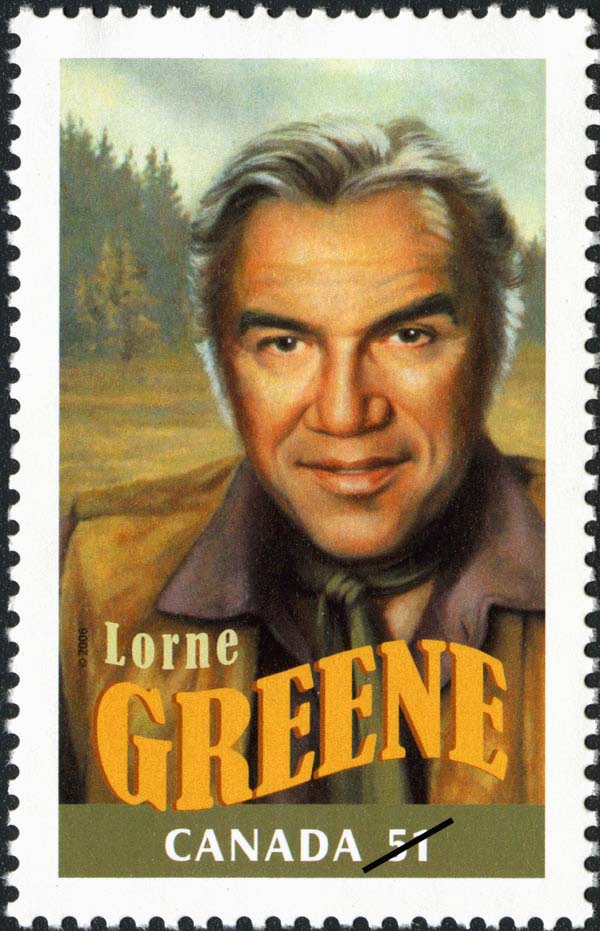 Canadian actor Lorne Greene is featured on a 51-cent stamp issued by Canada Post in 2006 as part of a series honouring four actors who made a lasting impression in Hollywood.

On today’s date in 1978, Toronto actor Lorne Greene starred in the new sci-fi TV show Battlestar Galactica, which premiered that evening on ABC.

John Candy (SC #2153a), Fay Wray (SC #2153b) and Mary Pickford (SC #2153d) were also featured in the four-stamp issue, which was printed by Lowe-Martin on Tullis Russell coated paper using five-colour lithography plus varnish. The stamps also have general tagging along each side.

“Canadians have had a tremendous creative influence in film and television, and these stamps recognize their success as part of our heritage,” said Danielle Trottier, stamp design and production manager at Canada Post.

The different screen eras during which each actor rose to stardom are represented through typography. For example, Greene’s name appears in a distinctive Old West type that recalls the TV show Bonanza, which he starred in for 14 years. 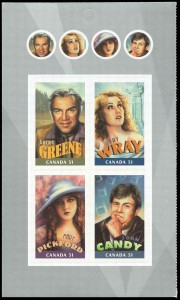 Greene is featured alongside other Canadian actors on a four-stamp pane issued as part of the ‘Canadians in Hollywood’ set.

Born in Ottawa in 1915, Greene became well known to Canadians as a CBC radio journalist during the Second World War, when he earned the name the “Voice of Doom” for his grave tones.

After the war, Greene returned to acting and eventually won the television role of Ben Cartwright, who was “Pa” on Bonanza. His most successful television work after Bonanza was his four-year stint as the host and narrator of the syndicated nature film series, Lorne Greene’s New Wilderness.

He was appointed as an Officer of the Order of Canada in 1969 and has also been honoured with a star on the Hollywood Walk of Fame.

“My father would have been proud of and grateful for being included this set of stamps,” said Chuck Greene.

Inspiration for the style of the four stamps came to designers John Belisle and Kosta Tsetsekas, of Vancouver’s Signals Design, as they began the research phase of their creative process.

“We started by looking at old Hollywood movie posters and soon realized that this was a great design concept,” said Belisle. “The feel of movie posters has changed over the decades, but they’re always bold and dramatic. We tried to capture those qualities on the stamps, with iconic portraits and typography in motion, to suggest moving picture.”

The challenge, explained the designers, was to create a consistent style for four stamps that would encompass four very different actors and screen eras.

“We selected images for each individual, but the quality of the photographs varied too much to reproduce them,” added Tsetsekas.